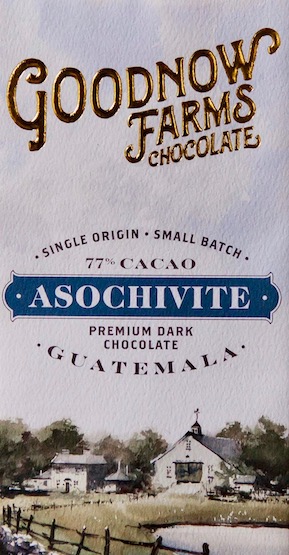 Impact
Money, the saying goes, is the root of all evil.

Could the tree Theobroma cacao &, by extension, chocolate be the damned offshoot of it?

The K’iche in Guatemala call cacáo awas che’ (the tree of sin) because its seeds, dried into cocoa beans as the key ingredient in chocolate, were once used sacrilegiously as a kind of currency among certain Amerinds. Prior to that desecration, they held it aloft as a tree of knowledge.

Just a thought to ponder while taking a bite out of these chocolates.
Appearance   4.9 / 5

Dark Bar
fruit impact in a reverse spin on the Aromatics, going from dragon fruit to jocote (hog plum) &, in line with the maker's notes, mango (as marmalade, thick & sap-heavy) -> flirts with blackstrap molasses without tipping over into it -> streaming lime then screaming granadilla, utterly passionate in its expression -> tertiary caramelized cocoa

Dark Bar with Maple Sugar
maple-dominant... transforms those bright notes of the Dark (above) into sour raisins -> maple bark -> bog finish
Quality   15.9 / 20
Dark Bar
77% cacáo-content; Batch #1035
Who saw this coming? A citric bullrush to the finish.

A bit top heavy for sure by the end. High bright volatiles stick it to the T-buds ('T' for Taste & plenty of it here). The bottom ballast though holds, however modestly, for a balancer without which this bar would rip the tongue out. A cacáo that could benefit from a couple more basis points of sugar, dropping the percentage from the current 77% to somewhere in the slot between 72% - 75%.