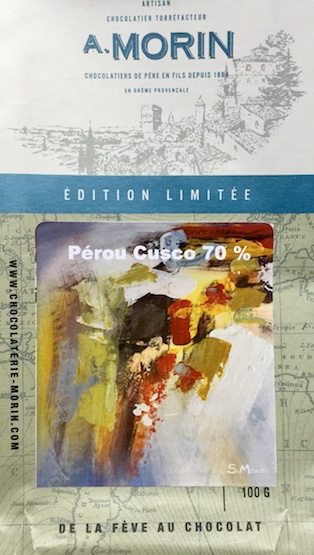 Impact
Some rate Dark Chocolate using the Schmidt Sting Pain Index -- a scale that measures the relative pain caused by the stings of nearly 80 species of insects in the Hymenoptera order (wasps, bees, ants, et.al.). Entomologists subject themselves to stings, ranking & describing them in colorful detail (sort of like the C-spot™ for ouch!). One sting, for instance, produced "trembling in the form of a totally uncontrollable urge to shake the affected part".

Bitter chocolate likewise can do that.

Aroma   9.3 / 10
super-rich drafts
huge cocoa plumes
golden-roasted nuts & seeds
tender woods
abiding Earth elements
Mouthfeel   13.5 / 15
Flavor   43.1 / 50
powers up 3-C -- cocoa / cream / caramel -> balsam of Peru / vanilla -> starfruit sweet spot juxtaposes bitter-roasted coffee grounds (what polarity), the twain vie for supremacy only to finish in a virtual tie to the bittersweet end -> late woods ear mushroom
Quality   16.3 / 20
Franck Morin, ensconced & entranced in France, apparently by Peru. How else to explain this his umpteenth bar from that origin. Has anyone covered a country more extensively than he? And with such broad range of diversity -- both geographically & organoleptically -- within it. Crown him the King of Cocoa Peru.

Yet another bar from this venerable house of chocolate that delivers satisfaction. Strikes a golden median between Bruts and Cloys seeing how Morin here caters to both in a single melt. One that steadies right on the fulcrum & stays there.... poised in a pose... which way it never goes.