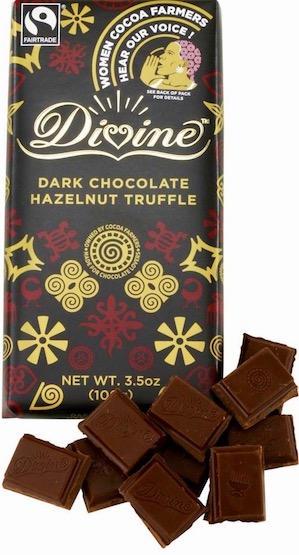 Impact
SJW Kristy Leissle, aka Dr. Chocolate, now lives in Ghana. She investigates the cocoa industry there -- the world's second largest producer country. Her latest book, simply but deceptively titled Cocoa, peels back the layers to give a close-up on all this complication called 'chocolate'.

Colonialism & its legacy weigh heavily in Cocoa. Ever since the Contact Period when Europeans were first introduced to cacáo / cocoa / chocolate in the New World. Back then Mesoamericans held cacáo sacred, central to their cosmology with maize, who revered it in a "masculinized" context.

Now that West Africa revs the engine for cocoa commodity markets, where programs empower women (evidenced by this bar -- see wrapper above), in countries with sizable Muslim communities, certainly the cultural appropriation of cocoa appears complete, no?

Read the book, cocoa-brains, to judge for yourselves.
Appearance   3.9 / 5

A bar handled by female farmers of Kuapa Kokoo. As Ghanaian men chase better opportunity costs in the cities of the hottest economy in the world right now (yes, capitalists, forget China for the moment, it's Ghana), the cocoa industry appears bent on women staying home, tending to the harvests, & left holding the bag so to speak (re: cocoa sacks).

The winds of change carrying the smell of progress is chocolate?