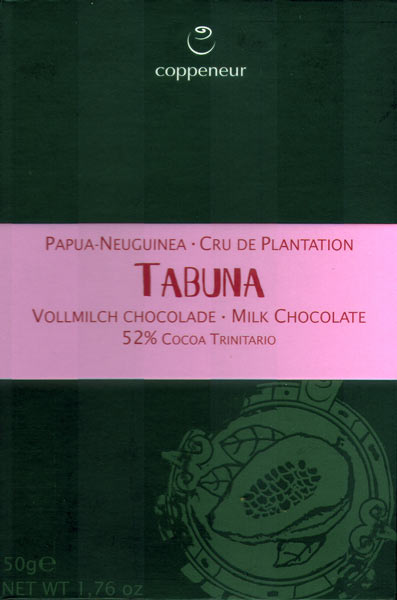 Aroma   7.9 / 10
heavy vanilla-orchid compound for soft caramel... melts on the nose before it even gets in the mouth; buttermilk w/ cheese-thickness & thin chocolate moss on the bottom
Mouthfeel   13.8 / 15
Flavor   47.2 / 50
yellow caramellow (lemon) -> chocolate volcano (tea & tobacco w/ savory salted illusions) the lahar to single malt territory (peat moss) -> yellow snapback, this time in deeper milk undercut by all that volcanic chocolate hinting at schisandra + chokeberries subsumed in the foggy bottom below -> burns out on vanilla orchid/barberry after-glow
Quality   18.1 / 20
Over delivers, extracting a diamond from a lump of coal. Vanilla (rarely employed in Coppeneur's bars) & milk transmute the murky bitters of Tabuna 72% into a savory wall of deep caramel while retaining enough of those surly acids for contrast - all in a profile that seamlessly transitions. Rich roast matched by equally intricate conche, this bar at 52% has less muscular anatomy, especially in texture, than Maglio's 36% superstar Papuasia (also from PNG), but greater core flavor - as can be expected from a higher percentage.