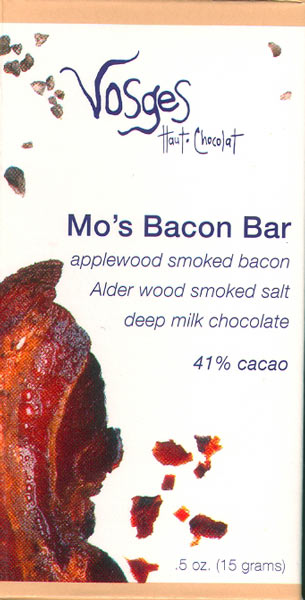 Impact
Scum de la scum... rancid swine grease & dead Easter Bunny chocolate. The kind of hazmat 5 year-olds make when bored in the kitchen. Put your pig-snouts on, kiddies, here sum mo’ analingus which, in the words of Greg Melville (author, Greasy Rider), will have you saying 'cool' while thinking 'creepy'. 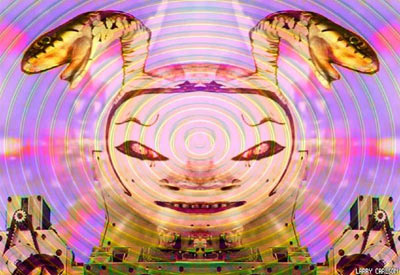 image by Larry Carlson
Appearance   4.1 / 5
has that ‘we’re in trouble’ look
Aroma   4.7 / 10
greasy sweet mess highlighted by hot dogs & magic-markers, paraffin & cherry cough syrup
Mouthfeel   12.6 / 15
Flavor   12.9 / 50
unloads year-old cocoa & rancid pork-fat salted into baco-bits from the stale salad bar after the pig served time in some industrial concentration-camp standing deep its own excrement in the feedlot (thank you, Wendell Berry) -> all wrapped up in 1 artery-clogging abomination -> length is all bacon grease
Quality   2.5 / 20
Vosges is best at polluting the streams of urban marketing. Not a self-described “exotic candy bar”, just a moronic one... & nauseating play on sweet 'n salt; hurled chunks after this... really. If only it were possible to un-taste it. Maybe Vosges’ reliably poor quality is faultless in this particular case, more simply a matter of ‘what’ rather than ‘how’ as one of the world’s deft flavorists, Joseph Zotter, showed in his equally disasterous bacon-bar Kaffee-Pflaume mit Speck Krokraut. In any event, if you have to work the next day, this will prevent it. Or, if you don’t want to show up for work, giving the boss this is as good as a doctor’s note.