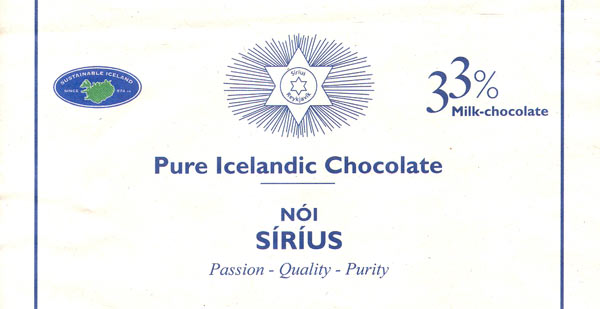 Impact
From the land of fire & ice... this the iced-Sanjaya of Chocolate: entertainment you learn to accept. Would make a great White Chocolate.
Appearance   3 / 5
a sickly block ya just gotta show the love for; each & every one of its 3 points in this category is a gift of donating to what appears a homeless orphan
Aroma   5.1 / 10
cat milk / pap (watered down milk & white bread) -> rubber ball -> lemon trace
Mouthfeel   13.2 / 15
Flavor   40.6 / 50
screeching metallic-minerals -> long drone plastic caramel -> mold -> curdled milk spot -> pencil eraser then... whoa... cinnamon! -> butterscotch... who could’ve thought
Quality   14.8 / 20
Way out there in orbit with Sirius Satellite radio. The milk must be truly different in Iceland, which maybe accounts for that whole nation’s lovable quirkiness. A respectable CBS ratio of ~ 2:3:3 adds heft to its character. Given the provenance (the country hardly has much of a chocolate tradition), Sugar Cubes from Iceland now stands for more than just a band... this will equally rock your face off.