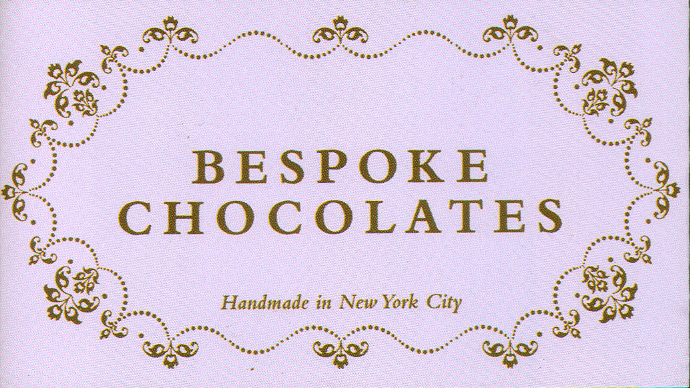 Impact
‘Bespoke’ in places like London -- over there’s the home of English -- means ‘tailor-made’.

Back in Manhattan, the city had to carve out an alley off 1st Street called Extra Place for retailing this because it’s extracalifragilisticexpialidelicious. And NYC could be tasting a brand new queen of the chocolate scene. Kee Tong is great; Rachel Zoe Insler may be even greater. As Rod Stewart says, “ya always got to be lookin’ over your shoulder”. He should know; just ask Mick Jagger who peered over his to usually notice Rod.

Bespoke, as in thus spoke Rachelthustra.
Presentation   4.2 / 5
no-frills utilitarian; ditto the generally hand-rolled lumpen truffle shapes
Aromas   4.6 / 5
dusted, dark, & dense equal daunting (heavily ponderous)
Textures/Melt   9.5 / 10
Flavor   45.8 / 50
serious fun; flavors well-expressed in round cream base to link up & harmonize; so much cream should smother chocolate & there is bitterness-supression but nice dry tannins manage to punch thru, a tribute to both couverture selection & manner of deployment/pairing (& any mistakes mainly couverture-induced)
Quality   27.1 / 30
Luxotic. Protégé of Keith Hurdman (ex-Melt in UK) displaying signs that the pod falls close to the tree. Very C-spot ready... making the jump from academia, as it were, to the pros in a single bound. Lots of game, charisma, & polish.
Selections
Single-Estate - classic-looking dirt-ball; a misnomer though as this uses Santander’s 70% which pulls cacáo from more than one plantation but still a pretty true exposé of that bar done up in ganache; super cream fill that further softens the Santander pastels, especially the hibiscus/cherry components w/ a wink toward marshmallow; a good crowd-getter... tannic enough to draw the darksider acolytes yet on this side of the sweet-light to attract novitiates
South Hampton - bounce & gravitas / power & finesse... apricot bleeding thru the wall, quickly meets up w/ streamline Black Ceylon tea to race across cream framed in a bouyant Valrhona couverture; instant lotto jackpot
Strawberry Balsamic- brash & imbalanced; a triple play of the berry, the grape, & the seed that converge on one another & stack nearly in unison w/ too little off-set as even the couverture (possibly Valrhona’s Caraïbe) follows in too close an alignment
Cognac - whether Grande or Petite champagne grapes, this is all massive-nitro; cream-collapse around fruit shards (truffle shell fragments); initial bright red scope, then concentrated dark-mellowing sweet spot (alcohol interacting w/ cocoa – in all likelihood Araguani), & finally stringent tannin passage; phenomenal equilibrium of great holding power & poise
French Milk - instant caramel roll waxes out at the back thanks to Jivara Lait (signaling once more that Valrhona has a hard time getting its milk on) then saves itself w/ a chemical isomalt-like hit
Pretzel-covered Sea-Salted Caramel - a mouthful in name & game; sounds like throwing in the kitchen sink, cupboards, & tool box because... well, it does; hand-built then all mashed up by biting into a crunchy-munchy gooey-oozy-good salted-chocolate subway & the conductor suffers an accident & has to relieve himself by getting off at the last station that was just past... “watch the closing doors”... meanwhile this heads on for a train-wreck – prepare for impact