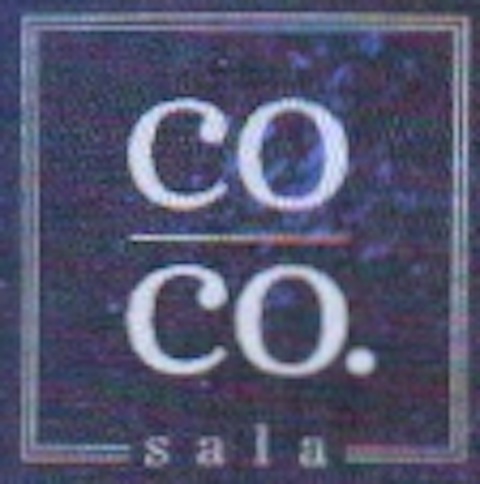 Impact
What does it say about this oft-called "fine chocolate" niche that in the capital of the supposed "richest nation on Earth" (albeit bankrupt & polarized) that a truly fine purveyor of premium bars from around the planet -- Biagio's -- bellied up & closed its doors?

(Well, okay, not quite; the space has since been occupied by a bonbon maker.)

That politics & chocolate don't mix? Throughout history cacáo has usually had a seat at the negotiating tables of summitry.

That power brokers are uninterested in dirt-poor commodities? Good point; why bother when they can invade oil-rich fiefdoms.

Ahhh, the free lunch program, Washington-style, which the country will end up paying for... with the next generation's entire lives.

If any of the above, then bet this box got its start making chocolate-covered pretzels or potato chips catering to local preferences. 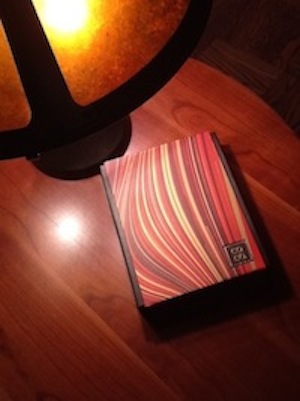 Wow to the box & brochure for the visually-literate -- a "cocoa-table book" with magnetic closure... enough to expect gold jewels or at least silk undies from this thing
Vintage graphics with countersunk logo; the internal packing -- standard white stuff... really? after dropping the dime on the box & insert, not even brown cushion?
Plastic sheet with cool logo is on top ... what, no tea paper??
Inside, machine-molded pieces (tight fit & finish) cradled in plastic trays...nestled neat in a row... again, pretty standard for upmarket
No handwork in evidence...lots of airbrush & sugar stencils
Square pieces perfect for refrigerator magnets

The enclosure reads: "Each exquisite bite is a story -- some dark, some sweet -- a story that begins with passion & ends in pleasure". Oy, this kind of script deserves a whole section on The List of Banned Words except it rings pretty true-to-trite. 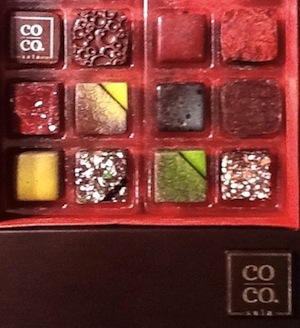 Aromas   3.2 / 5
knobbly nosed & solid as a bookcase made out of cardboard, pencil shavings, dust, peanuts & hot cocoa mix
Textures/Melt   6.7 / 10
Flavor   36.1 / 50
some good, clean flavorings that taste natural held back by dull, unrewarding coverture (mediocre quality of no depth) & harsh sweet edges (Karo™ dark syrup in the ganache?)
Quality   19.6 / 30
High craft embedded in the design: box, insert, layout.
Selections
72% -- CoCo Sala's version of a Palet d'Or comes on strong with a strawberry-like patina on the tongue underscored by a dried-cocoa plank (Dutched &/or cocoa-powder boosted), the 2 closely joined together; very impressionist, even dazzling, & inexplicably works in an unexpected way

Rosemary Caramel -- every element very identifiable, including the unremarkable Dark base except it solders them all together into a sort of sweet herbal paté; outstanding, such as it is

Pistachio Kulfi -- traditional dairy dessert in Indian; light all over (color & flavor despite the fresh zest) yet denser than cream & incredibly melded; yeah, the chocolateers at Sala may be English-speaking but this carries their Indian passports

Java - another direct & evident piece; coffee cupped in a firm chocolate casing to extend its length ever further

PB&J – really? IGA brand, right?; hyper-sweet peanut butter, even the jelly goes granular from all the sugar… all this great packaging for a nut-fluff

Finally, no idea what the gooey yellow-topped ish is... maybe Salvador Dali's balls tripping in choc-snot.... F his watch melting... palates will do the same