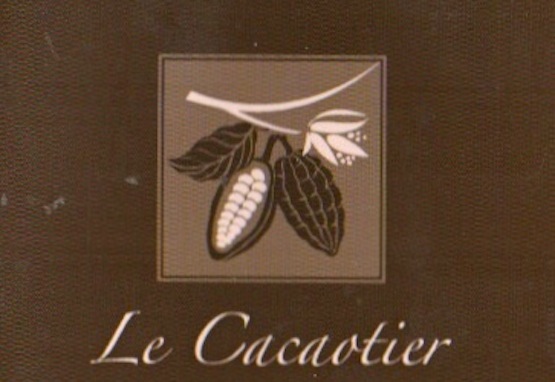 Impact
Chocolatier (or remelter / transformer of block couverture into infused truffles / bombones / assortments) appears common enough to enter the vernacular, unlike cacaotier which, as far as anyone can tell, is unheard of. Cacaotier on the face of it infers a craftsman working back to the very source from which all chocolate derives, viz., the cacáo tree. In the C-spot's® parlance, a barsmith (replacing the awkward 'bean-to-bar').

Herbert Masse is Le Cacaotier behind this box but he, apparently, assumes the same starting point as just about every other chocolatier on Earth (save for a few rare breeds like Vestri). He uses off-the-shelf couverture rather than processing raw material cocoa nuts into finished chocolate himself.

Nor here in this collection.

A refined & classic neighborhood institution on Rue de Levis in the 17er maneuvering to keep up with newer trends. Every step along the street pulses a foodie's heart to beat faster. Enough to make any proprietor insecure eyeing the competition.

And yet, in a city crowded with chocolatiers of every stripe, Le Cacaotier offers little daring to merit a return visit.
Presentation   3.9 / 5 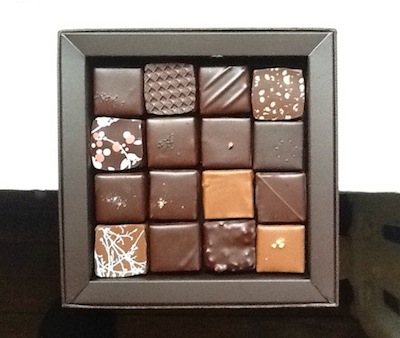 & for those who philosophically want from a shell a world of full-flavored chocolate even before the teeth reach the ganache (typical Dark bar people) without taking away from the ganache itself lest it all become anticlimactic (a tall order) but on the contrary, a full-on chocolate experience of shell to lead to an even fuller experience in the center -- 2 distinct waves of contrasting texture yet amplifying flavor -- well, this ain't it
Quality   25.8 / 30
Meilleur Chocolatier de France recipient for 4 years running & numerous Croquers Club accolades.

Adds up to high proficiency & low wow-factor equalled only by a lack of creativity, plus a bit of an identity funk clinging to the classics while attempting to forge ahead with contemporary leanings.
Selections
London -- soft all over (Flavor / Texture) with subtle twists & turns on bergamot tea, & chocolate, & itself as the combo inflect dry blackberry liqueur; subliminally indelible

Farinelli -- if most caramels pull on the teeth with all the force of tractor, this buerre salé (salted butter) barely tugs… the elements minimal, rather separate & rustic (for instance, the salt just sprinkles on top) finessed into a soft butterscotch; benchmark material

Catalan -- ganache-noir embedded with orange / mandarin at the hushed trace-level of intrinsic to the chocolate itself; considerable in skill if not scale

Araguani -- another direct transmission, this one of Valrhona's black-on-black glimmer-twins blend of the same name; now even better than first remembered

Mozart -- Milk almond-praliné of heavy body & flavor cut, seemingly, by citron with the ease of the master's flute concertos

Taïnos -- in an ode to the pre-Columbian inhabitants of The Dominican Republic, Le Cacaotier presents burning rubber, tar, & gas (per)fumes; the worst of this or just about any set, doubly so considering the renowned origin & the tradition it supposedly honors; a shame