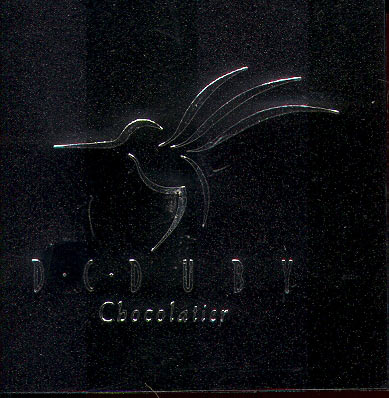 All earthly elements they handle become etherealized like their Ice Wine Series picked from grapes grown around the Great Lakes. Heard about the water in those polluted tubs irrigating these vines? Well... super-sonic geniuses turn it into pure crystal injections.

They can do it like that, like the miracle man in the middle of the da Vinci Code.
Presentation   4.9 / 5
botany science kits iridescent with dazzling opals, golds, & browns
Aromas   4.8 / 5
express hi-tech nature preserves + unfathomably deep cream-toffee
Textures/Melt   7.7 / 10
Flavor   47 / 50
trends toward dark low bass notes... lots of savory bottom
Quality   28.8 / 30
Lab precision, meticulous as silicon chips; 1st rate preparation & production from a techno-Kraftwerk kitchen.
Selections
FILLED-CHOCOLATES: The alchemists’ philosopher-stone, the net greater than the sum of its part: from, but no longer of, for it becomes above, though still, chocolate. Cindy & Dominique Duby are flavorists whose only peers in the world of chocolate are Josef & Julia Zotter.

Milk Crispy Port Wine Praline -- obviously sweeter than the Dark version (above), fuller textural body too, amplifies the nut quotient though at the expense of port which stands more in service to the generalized confection even as the ending showcases it in a grape-reduction light; still formidable

Ecuador 36% Milk Almond & Salted Butter Caramel -- desultory & evasive for the first half largely due to an expectant melt taking its good ol' time…. fortunes shift as the subtle almond & supple butter caramel drive a confluence into a dark toned confection of themselves; built on Wild Sweets Camino Verde Milk Chocolate base; for generally pronounced line, this presents an understatement & outstanding all the same

Black Truffles & Cocoa Nibs – towering confluence; dense sweetness swept right off the forest floor; textural architecture & concentrated traces of mushroom, cinnamon, anise, nuts + redwood (which pretty well sizes it up); impressive even by DC Duby standards; would be the height of many & almost any collection

Squash Truffle – maple & pumpkin seed carry most of the weight over squash; rolls out to an un-denatured candy bar confection; top-shelf

Shiraz, Cherry & Violet – a squirt gun that stays wet on the tongue all night long; for those learning to understand persistence

Vidal & Orange – pronounced passion/guava upsurge that never dissipates wrapped by orange twist; the infusion all in, the chocolate a bystander

Cherry/Anise & Hazelnut – trichotomy quickly resolves in flavor of filbert; initial raw fierceness tempered by distillates that linger on their essences over an neutral chocolate canvas

Almond & Black Pepper – Vader-like depth; pepper pulls the almond down into the loam layers of concentrated extracts w/o ever diving or rising to a molten hot spot

99% & Tennessee Whiskey – as faithful & spirited as the hills from which they came; whiskey corona matching a raised criollo; force-on-force producing double the sum of their parts