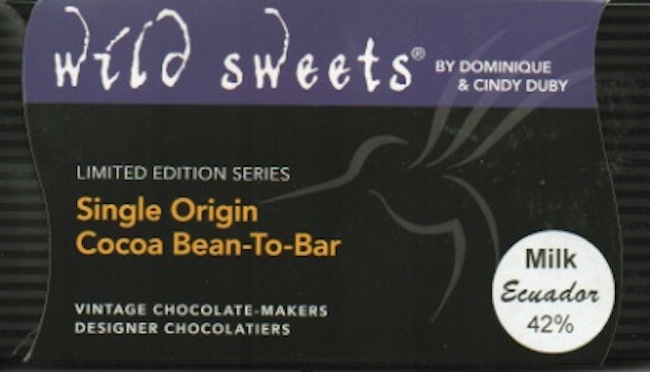 Impact
The world's strongest current is found in the Nakwakto Rapids at Slingsby Channel, BC with speeds up to 20 MPH.

And the undertow from these brackish MCs by Wild Sweets, just down the coast in Vancouver BC, measures about as forcefully.
Appearance   4.8 / 5

Trinidad
similar start on salt whose sprinkles glaze the airside of the mold & mineral content give this cocoa a sodium bath -> dark caramel -> sweet black mission fig -> St. John's fruit / carob pod detected in the Aroma -> extracted molasses -> licorice root (Glycyrrhiza glabra)
Quality   18.3 / 20
From the ever serious fun luvin' Dominique & Cindy Duby of Wild Sweets who change their line with the seasons &, seemingly, their name too.

This barsmithing duo, interestingly enough, eschews for the most part single-origin straight Dark bars in favor of Milk Chocolate for a couple reasons: a) the latter is more elaborate than the former & b) it suits their wheelhouse as supreme flavorists par excellence, a sophisticated Zotter so to speak. Hence even most of its Darks contain inclusions.

All sums into hi-level output / gastronomics.

Ecuador
Camino Verde, Balao; 42% cacáo-content
Quite the compound. A bevy of ingredients simultaneously surpass the Camino Verde base while fusing the components into a unit that almost fools of a traditional Milk Chocolate with fleur de sel that integrate flawlessly / seamlessly to revert back to the cocoa from whence it's all based.

Trinidad
Less involved than the Ecuador (above) but no less intriguing. The tags, especially the molasses & licorice so true, direct, & seemingly fresh.