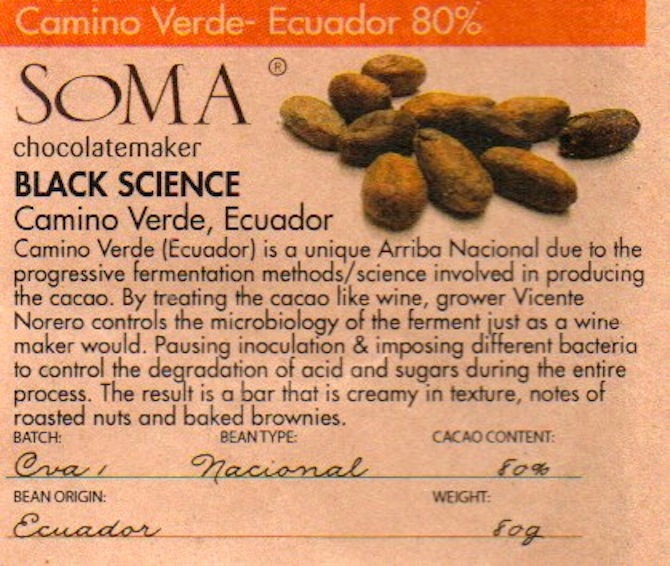 Camino Verde can generally be a static chocolate within each of its veritable fermentation pre-sets (Herbal; Earthen; Fruit, et.al.).

All the advanced micro-biota points to multiple options for Camino's buyer-barsmiths so that each can walk away with a quasi-customized overlay while the common underlying characteristic for all these Camino Verdes rushing into the premium market space -- Dick Taylor, Fruition, Ritual, Rogue, Woodblock -- serves as a kind of root stock that holds a certain stable platform on which to integrate those overlays rather seamlessly.

Each to date have recorded good marks… attesting to both the skills of these various barsmiths as well as planter Vincent Norero's near damage-resistent cocoa.

This one proves likewise & reveals Camino's more Naked side, practically nothing but basal cocoa flavor. Much of that attributable to Soma's own handiwork which cooks off the nuances. It blasts up the furnace & should probably reduce the heat 5% - 10% to eliminate the burnt edge which would still leave the sustain unaffected.

As is, a bar that stays put & goes nowhere; hence the length deceives in that it really has none, other the melt itself. Thus, extremely poised, doubly so for 80%, with or without the added butter cut.

10% down-shift in cacáo-content produce little in the way of catalytic conversions. In fact, this bar reduces them compared to the 80% which may be more a measure of the vintage, the seed stock, & the fermentation pre-sets at Camino Verde than any sugar variable.

Still, hyper-controlled drive / dive into lingering legume folds when all the mass clears the throat.