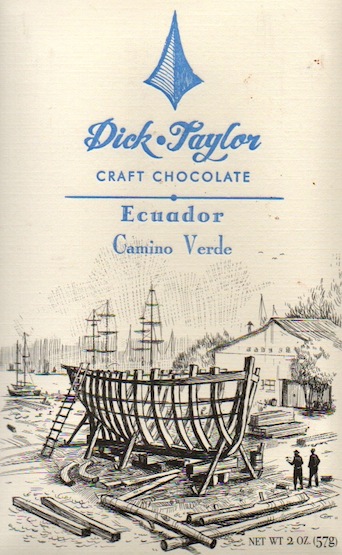 As Adam Dick explains, he & co-craftsman Dustin Taylor run a 50-50 mix on Nibs & sugar crystals to produce flake, then dry conch that while adding the final 25% or so of chocolate liquor. This results in fantastic partitioning of the flavor spectrum as some particle suspensions integrate more deeply than others. Hence, along with other factors, it helps create those interactions between dark zones & leavened whites.

If Rogue's Balao imparts Bourbon impressions, Dick Taylor imports dried mushrooms (upping the cacáo-content a point to 76% renders, as expected, a negligible portion of that difference).

Very agile for such brooding characteristics (reflective of its Color). For instance, that middle frame, smoked but not smokey. The dirt, in danger of undertaking tongues as shovels digging down, stays top soil brown.

A chocolate that continually gives & never needs forgiving, a bit of a rarity as even some great bars bear scars of a blemish or two. Virtually none here.

The first early contender for bar-of-the-year of the 2014 season.