A new style of bar-making has emerged throughout the New World, dramatic enough to be added to the C-spot™ Census.

These clean / lean ‘n mean high-percentage pieces embody an indigenous ‘retro-American’ approach. Usually containing only cocoa beans catalyzed by minimal-to-modest sugar, without any other additives (neither vanilla, nor lecithin, nor additional cocoa butter). Slightly underdone / underdeveloped, though by no means unrefined – a house preference (imagine lower-impact processing without Domori’s ultra-polish) – that lets cacáo do most of the jawing for itself. Sums up to ‘addition by subtraction’.

Often realized thru granite-grinding that leaves no stone unturned in the chocolate; indeed, it leaves some behind in it (often more than a mere ghost trace). Or ball mills that abrade off small bits of oxidative metal. Plus, a light roast in the tradition of American pioneer Scharffen Berger, followed by a conche that partially or even barely coats the particles (almost Mesoamerican… before the conche invention). All of it creating semi-wild signatures to re-conceptualize chocolate along the same general lines that painters once argued: social realism (in chocospeak – market demands & consumer expectations) vs. color / formal problems of art (underlying truths & more abstract flavorings as tones flatten out, generating less illusions of what food-hounds like to describe as “hints of _______[fill in the blank]”). The subject being the bean itself rather than some confected artifice of it  (for the latter see any Vosges, Chocolove, or even Bernachon for that matter).

Put in a historical perspective, this further repudiates the mass-produced candy industry whose chokehold on taste preferences can be traced at least to the early 20th century with the ascendancy of branding from now-household names like Mars, Whitman’s Sampler, Godiva, et. al. Ironically, to continue the aesthetic analogy, right around the same time as the 1913 Armory Show that marked the advent of Modernism in America. (A similar milestone in chocolate, albeit imprecise as wont with most analogies, would be the launch of 70%.com in 2003.) Bars like Ujuxtes 70 by Danta, or Amano’s Montanya, Askinoisie’s Davao &, in a more radical Old School vein, every issue from Taza, partially bear the fruits of this collective labor.

A style that fashions the spirit of the C-spot’s™ motto — “Welcome to the Retro-Revolution of Chocolate”. A modern return to cacáo’s roots when only a metate would do, in homage to the great stone builders – the various Amerinds – be they Olmec, Izapa, Zapotec, Mayan or Mexìcâ (Aztec)… chocolate keepers all. 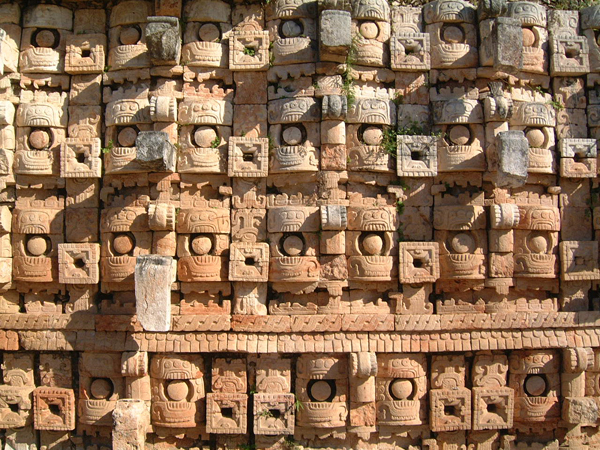 Detail from the stone façade of the Palace of Masks, Late Classic, at Kabah (Mayan for ‘good hand’) in Yucatán (Mexico) with its repeating Warholesque pattern… not of Campbell soup cans, but the long-nosed rain god Chaac. A stark reminder in a dry terrain: no water, no cacáo.