The Future of Chocolate

The question often arises from those who want to touch it & eat it NOW: what will chocolate look like / taste like in 10 or 20 years?

Uniformly premium & extra-fine, with greater variety & diversity, as well as preservation of heirloom stocks? Or, thinking we can augment what little we have left by desperately holding on for dear life by aging bars for so-called ‘vintage chocolate’?

Maybe stuck deeper in the candy bin as sugar-slain product?

Or increasingly culinary perhaps – a spice in the kitchen, on various plates & dishes? How about back to the future… primarily as a draft?

A nutraceutical or even pharmaceutical rather than a food? A cosmetic as much as a digestif?

And will farmers be just as impoverished, or can theirs become a lucrative profession of estate-grade vintages?

Aside from the curiosity, the better question may be ‘who’ rather than ‘what’? 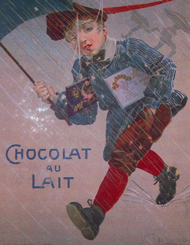 Kids are the promissory note for tomorrow, to be cashiered once grown up or, in the case of prodigies & parents hell-bent on rearing child stars, ASAP before then. In either event, next to suckling, the primacy of chocolate as one of the first flavors indelibly imprinted in our memories is profound (reinforcing the milk-chocolate connection) & one of the few things that grow with us from childhood. The conventional progression in the USA runs along the lines of M&M’s™ at 3 or 4 once the threat of choking subsides, Milky Way™ at 5, Hershey’s™ around 8, Whitman’s Sampler™@ 10, maybe semi-dark Lindt for 12 or so, & something like Godiva by 16… then the hard stuff from then on kicks-in for the daring… as taste buds & the id expand, so too the need/experience for greater cacáo.

Lost on many is how the association of chocolate & childhood is culturally & historically conditioned. It wasn’t always this way. Prior to 1828 & Dutchman Coenraad Johannes van Houten it was anything but. That this came about thru a series of technological innovations involving alkalis (the “Dutching” process), milk, & tons of sugar which conspired to domesticate chocolate into a long-advertised campaign of simpering innocence helps explain why chocolate’s retro-revolution back to its roots of a pure-play powerhouse meets with some resistance. The counter-reactions are legion: ‘Oh, that’s so bitter’; ‘No thank you… it just doesn’t taste like Nestlé’s™’; ‘Ka-kow´ is a tree? But I thought chocolate came from a cow!’ Notions that can be nourished ad nauseam, some even by industry execs, cocoa gurus & craft makers alike, disseminated with all the accuracy of a chain letter so in time they become so pervasive to be mistaken for facts. Repeat a line often enough & people start to believe it.

Chocolate sellers & educators today, with notable exceptions, feed on this by dumbing-down of the public as any good politician with the most basic tripe because, they claim, the masses demand it. The economics of it promote short-term thinking; to tap the market where it currently sits instead of shaping its trajectory. And the downward spiral continues for the most part from there.

So, how then to elevate standards within this dynamic? Maybe those counterintuitive French students during the Sorbonne riots of 1968 could serve as an object lesson: let the kids run the academy.

Youth after all, as much as a disgraced Republican Party, got an African-American elected POTUS. (Just ask Hillary who had to rent fleets of mini-vans to transport her predominantly senior supporters in the driving snow to the Iowa Caucuses while the Obama campaign simply txt.d their following.)

Since everything else in life is sped up (kids out-think their elders by, what, age 6, & cruise porn sites a couple short years later), why not start ‘em out early & accelerate what baby brains & blood crave: high-octane fuel that cleanly converts to glucose. Rather than chocolate per se, it’s probably sweets more broadly (many or most of which incorporate chocolate) that register these emotions. Cream, as noted, contains deep mammalian associations to motherhood that never get severed with the umbilical cord – even among the lactose-intolerant who usually long from some crème anglais every now & then. Or favorite cereals (again, often chocolate-flavored) from Cocoa-crisps to Count Chocula. And, of course, fruits (for which everybody goes bananas). So by combining them all – chocolate-chips sprinkled atop Banana Cream Pie with Cheerios crust? – cravings carried from childhood get quelled. Except for the reason that the candy giants neutered & diluted chocolate, it might’ve only rarely retained these infantile memories. (OK, granted, the science here is broad-brushed; details in another post).

Adults in support of finer chocolate everywhere might enable that link between young appetites & quality to ensure the fit survival of Theobroma cacáo deep into the millennium; essentially the ‘roots ‘n shoots’ appeal epitomized by Jane Goodall.

At least this promotes a good cause with the added bonus of being healthful. Maybe even make it part of pre-natal care & stipulate it in gov’t-legislated medical coverage!

Instead of snickering them with confections pumped with sugar, air, & slogans like ‘the best things on Earth are from Mars’, non-bitter bars of naturally sweet cacáo types requiring only modest sugar would do just fine. (An outstanding example is Ki’Xocolatl, a 25% sugar content that fools of 40% or even higher).

Anecdotally, kids react positively to the good stuff when presented as normative from the outset. In fact, many reject junk as a poor, fake substitute alongside a gold standard. Yep, humans are discerning at an early age. According to a published report in Psychology & Marketing, researchers from the universities of Wisconsin & Michigan found pre-schoolers as young as 3 can recognize different brands & offer preferences as well as strong judgments about them!

And to all mothers: happy moms & sweet babies can birth together. 305 pregnant women tested whether prenatal chocolate consumption could predict infant temperament. Investigators found that in addition to producing subjective feelings of psychological wellbeing for the moms, chocolate has effects at multiple environmental & psychological levels. Mothers who consumed chocolate daily rated the disposition of their infants more positively at 6 months postpartum versus a control group who ate no chocolate.

Once onboard, all those other curious questions posed at the beginning of this article may solve themselves.

Parents, think twice before being nice; 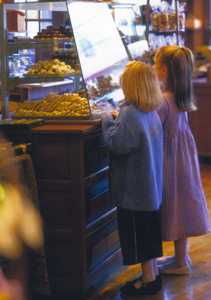