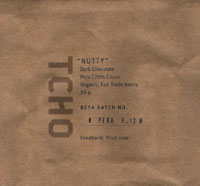 Impact
Technolution
Appearance   4.4 / 5
engineers in the packaging unit need to devise a design so bars can be wrapped w/o cleaving in half
Aroma   7.2 / 10
a little shuttered & overall butter-contained w/ none of its namesake: bio-diesel, balata (rubber) & charcoal (signaled by the color) -> climbing Peru vines & another Ecuadorian influence creeping in – cinnamon sizzling thru the ash -> florid undertone on the rubdown... hmmmm, as though the Huaorani forest-people whose ancestral homelands in Ecuador are being encroached upon by outsiders referred to as cowodes (“non-human cannibals") for logging & oil, & forcing them toward Peru, carrying some cacáo seeds to help guard against the unsafe witchcraft of the modern world
Mouthfeel   11.9 / 15
Flavor   39.3 / 50
green beginnings – chocolate, guarana, peach-palm leaf, & mango skin, the latter acts as backset acid the entire length -> pistachio fights for birth thru rubber ‘n tar -> aborted by a grousing bitter from charcoal -> reborn in a nut hole opening toward detectable walnut but acidity outlasts it; aftermath coriander (combining both citrus & nuts surrounded by warm cocoa)
Quality   16.7 / 20
Science can deliver performance often to struggle with passion - as does this chocolate (think Kraftwerk without the beats, Steve Reich missing the rhythm or, closer to home in the chocolate world, the cacáo-shaman Mack Domori devoid of the traveling jaguar-spirit on his treks thru the jungle). Indeed, trek vs. tech is the equivalent of nature vs. nurture in child rearing. Trekkers tilt the balance in favor of genetics & soil while the techies are, ironically, coddling machine-heads.

Tcho's basic processor metrics (primarily roasting & conching) are sound, placing this among the more carefully modulated Peruvians on the market, even for a batch that comes underfermented (slaty beans detectable in the mix), generating an overall streamlined profile that recalls some of Vintage Plantations substandard crops. But the vital juices are wearily pooling, the product coolly intelligent as if Tcho (for Tech CHOcolate) txt.d it in from the Space Shuttle for the ‘meet ‘n break-up’ online-nation thumbing it 24/7. Ditto its brochure that reads colder than a corporate prospectus, streaming with venture capital jargon about B2B clients, efficiencies, & capacities. All of which provide a portal onto this “Nutty” bar.

Categorizing the flavor spectrum – what the C-spot™ tries to do with every chocolate - is problematic, the gradients made slippery by the vagaries of cacáo’s myriad compounds getting in the way of hard & fast definitions. True, some nut analogues are here, glancing the intended target, though generally secondary & at times overwhelmed by acids.

Guys, after your machines have monitored the levels & your computers run the beta analysis on the focus group data, do a little old skool testing & taste the bars yourself before bagging them in their Jetson’s pack wrap. Then this stuff wouldn’t seem so “nutty”.