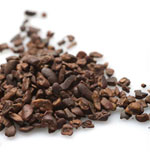 Impact
Tcho was born of a NASA engineer who never quite lifted off. And that’s a sound development for the mission at hand.

Nibs generally have a hard time cracking the C-spot’s™ Top-20 Meltdown since, by defintion, their texture is rough ‘n tumble, lacking the sensory butter inputs that stake out a melting point just below the temperature of the human body.

So be it; these nibs are well-grounded in Casey Kasem’s Top-40 trademark - “keep your feet on the ground & keep reaching for the stars” - spanning both ends of that spectrum.
Appearance   4.6 / 5

Aroma   9.2 / 10
unreal for a nib: sticky citrus... fruit juice concentrate (w/ slim malted-cocoa support)
Mouthfeel   11.4 / 15
Flavor   46.2 / 50
writhes out ground worms from lite soil rich in chert-> nut pack (almond, then hazelnut, to lean pecan) -> anonymous citrus (blank everclear acid silvered in the backdrop) -> earth elements re-assert, especially fungi truffles w/ those acids distilling archetypal Madagascar gin; latent chocolate deep in the aft-shaft
Quality   18.3 / 20
Insufficiently winnowed, creating dirtier profile on Nibs that are typically subterranean as a category to begin with. This accentuates a roast seemingly effacing the aromatics – its acids practically stripped of flavor, despoiled of any character (which would partially be the result of conching in releasing & developing definition if this were a bar). Perhaps a judicious choice given the recent Madagascar vintages have been known to rip the tongue right out. And yet Tcho fires well short of burning the bean into total bitterness.

Good work overall. Remarkably benign (other than textural considerations), especially for unsweetened. Almost snack-like, without any need to grit the teeth or grimace on the way down.