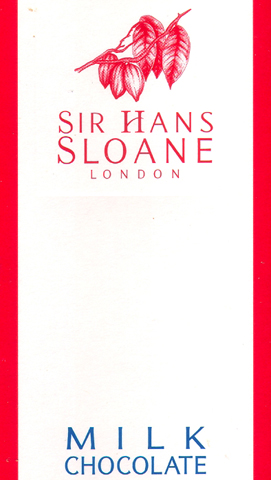 Impact
Bill McCarrick, the force behind Sir Hans Sloane, operates out of England but he was born in Bruce Springsteen’s USA.

This bar has all the stamina of a moose to recall more than Sarah Palin field-dressing one, but that original American force-of-nature - Teddy Roosevelt (Republicans tend to be this way; none of the cool cerebral refinement). Right after the 26th president was shot by a would-be assassin, Roosevelt went right on delivering his 45 minute speech anyway, opening his suit jacket to the crowd to show in full view his still-bleeding wound, booming how “it takes more than a bullet to kill this bull-moose.”
Appearance   5 / 5

SHS’s 64% possesses some Criollo-like Milk analogues (lactic acid) & this amplifies that then turns it on its head with all those salt-laden effects in the mid-palate, influencing less sweetness than actuality.

Texture somewhat incongruous with taste at times (powdered caramel at the start; savory smoothness further in; dark liquid at the end) to wonder when & where in the sequence ingredients were staged in.

40% sounds high for Milk Chocolate but most of it cacáo butter instead of coca mass & the combination of that, plus lengthy conche, fixes all those sapid notes, generating stamina even past the point where this bar seemingly collapses, only to stagger back up for those late developments (brown sugar in the mix?), making it more elaborate than its 64% Dark brethren.