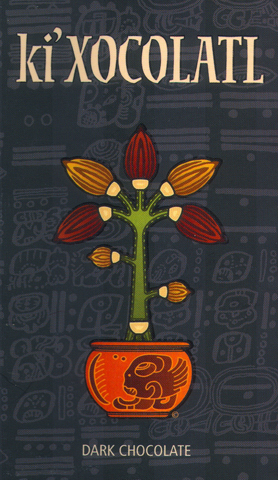 Impact
Shibumi (the simple/still-aesthetic of Edo Japan + a nod-out to Trevanian readers developing that hyper-awareness) as in Eureka... someone may have found ancient Criollo & very well could be among the 1st in a wave to ever so slowly lift the veil & unearth Mexican cacáo’s storied but shrouded history.

Overall dry feel contrasts to its cultivation - supposedly grown in the traditional Mayan way who so revered it in the Yucatán, where scant rainfall & poor soil make growing it nearly impossible, they developed complex silviculture, setting trees in ponds called aguadas & subterranean cenoté pools, considered real-world portals / pathways known as sacbes into the center of the Earth that pass through the “Jaws of the Underworld” -- a spirit highway via which the dead would travel in a larger saga of death & rebirth, further reinforcing cacáo’s symbolic associations with darkness, moisture, & the feminine.

This bar too posseses a cavernous flavor, very little light, just dense yet soft cocoa... the stuff of possible legends that chocolate spelunkers are in search of.

ki’Xocolatl may have struck the hallowed C-spot in a similar vein to Bonnat's Xoconuzco on the opposite coast of Mexico.
Appearance   4.1 / 5

Aroma   9 / 10
merry Mex: cocoa powder & coconut shell the veil over baking soda, spiced herbs (achiote, vanilla, pepper), copal resin -> ballons to ground cherry + chicle bubble gum
Mouthfeel   12 / 15
Flavor   45.2 / 50
mild cocoa redolent in vanilla -> sugar expressing itself in a cane juice spurt -> breadfruit -> faint ground cherry + chicle -> corkscrews & darkens to charred vanilla toasted over caoba wood -> drains away cocoa syrup
Quality   17.6 / 20
In a word, 'steadfast'... & about as Naked as it gets making for anti-complexity. Fools of Ivory Coast (cured reportedly for up to 8 days - a "Forastero"-type length - which seems counterindicated) except without any aggression. Even the wooden bitter insurrection (caused partially by the sweat box used in fermentation) at the mid-palate simply provides depth & minor constrast, no taste-blocking at all, & prevents the profile from being overly neutralized.

Fray Bartolomé noted in 1618 a Criollo from what today is Belize that tastes fine without any additives whatsoever. This could be a descendent of that; clearly some Criollo in its history.

It’d be revealing to a) eliminate the vanilla which covers & controls much of the contour by virtue of both the amount as well as probably being added quite late in the mix; b) increase the bean tolerance which should withstand reduced sugar content that was so readily available early on, creating a sweet beginning on the brink of cloying & raising questions whether this really contains only 27% or 28% white sugar; c) lower the heat a fraction on the roast to draw out a highlight or 2 on those fruited components; & d) shift the cocoa mass-to-fat ratio slightly.

That aside, a cacáo to nurture &, if reports hold up, revere.