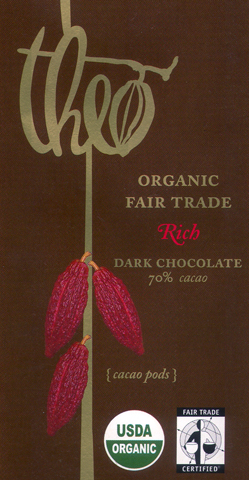 Impact
An American proverb advises “before borrowing money from a friend, decide which you need most”.

This robs the cradle right from cacáo’s birthplace (Ecuador, possible home to the species origin; & Central America rich in chocolate lore & history) but gives back perhaps more than it takes, making friends in the process of making money. It’s the closest bar in the craft niche to a Girl Scout™ Chocolate Mint Cookie.

This bar an adaptation of another Theo release swaps out Kumasi Ghana for Costa Rica, sacrificing core-chocolate flavor as underlying cocoa here randomizes once past that spectacular opening. And where in the past Ecuador’s sacrosanct cacáo would’ve made for an animated & profound offering, it now produces a generally dull crop. This melds some of its off-notes to create weirdly good flavor however. Ecuador’s legume bean, bark, & green overtones blend into Central America’s genetic pool for pronounced mints, eucalyptus, evergreens, etc., all those volatiles rolled smoothly into the butter conche instead of being driven off entirely. They cool the roast down too.

This 70% accomplishes what Theo’s prior blend failed in: better mix & integration. Whereas that was once easy pick apart, this is more difficult to tease out due to advanced technique but also, alas, the narrowing of cacáos types found around the world attributable to severe hybridization.