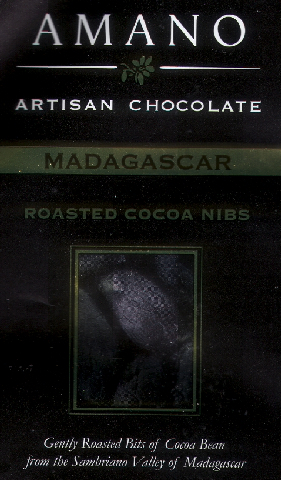 Aroma   7.9 / 10
cozy warm breeze for a Madagascar... precious little of the bright sparkle the island's cacáo has come to be known for (other than as ocean ions): lots more maltol than usual, commingled w/ jackfruit -> cocoa backdrop + kindle wood (juniper) -> deep funk-in-the-trunk but also some gum resin to resemble galangal (ginger / pine / vanillin mix) & tobacco leaf -> tiny ylang tincture
Mouthfeel   12.2 / 15
Flavor   44.6 / 50
brace the self: convulsing acetic entrance bluffs flash cocoa appearance -> chews down into ponderosa (pines) -> beef jerky brushed in móle sauce (a pair of savory twins) -> finely-grilled portobello in light-lime / mustard marinade -> goes nuts toward the finish (pecans) w/o ever losing track of acids that flirt w/ alcohol, then tip over for a bit of wooded vinaigrette instead -> stale funk in the Aroma makes comeback in the aft-shaft
Quality   16.3 / 20
Mad Nibs (& Madagascar chocolate in general) are all the pandemic rage nowadays in the USA... Americans drawn to the origin’s tart ‘n tang starburst fruit. Mast Bros, Patric, Tcho &, here, Amano have each tried their hand.

These in some respects are the most unadorned of the bunch; closest to the ground, & the visible husks – the 'secret ingredient' / indication of poorly-winnowed Nibs in the style of Tcho that also plague to a lesser degree Amano’s other Nibs – reinforce the effect. But what can husks do for you? Some of the best-tasting husks in the business, that's what.

A well-dialed, just-past-midpoint roast, in contrast to Patric, keeps the forces in relative balance & prevents them from pulling apart to squarely center the flavor on meat, making these Nibs kind of kindred to Mast Bros.

Another stark reminder that cocoa nibs far more than almost all chocolate bars are nearer to what cacáo is.