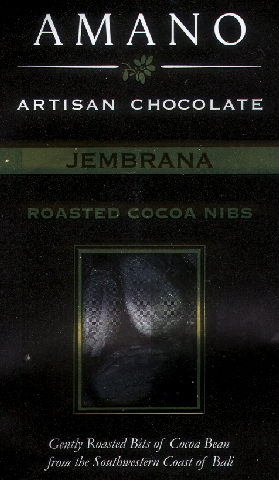 These unsculpted gems (nibs, that is) must be cracked from some happy beans. They're too good (at least earlier on) to talk while consuming - not that anyone will be able to anyways with nibs trapped between teeth, under the tongue, stuck in the throat... before it takes the suicidal death-march (as most Nibs do) known locally in Bali as puputan.

Resistance is then required to the bitter end because these nibs never surrender.
Appearance   4.5 / 5

A clear window nonetheless onto the genetics of this type from Bali & its flavor potential (especially those early aromatics that provide ebullient flavor tags) once it's fully developed by chocolate processing.

Amano renders a relatively light-handed touch in their vintage ball roaster to spare those delicate notes upfront that, conversely, also preserves the harsh ones at the back (further aggravated by imperfect Winnowing).

A mixed bag of beans, so to speak.