Impact
WWJD Well, let’s see... most view divine White Chocolate as the Air Guitar of cacáo, that ancient art originating after God wanted to rock out but had yet to invent the electric guitar. So God created one & instantly realized how sweet a thing He just made & sooo wanting to pass it down once man renounced Satan & bore no axe to grind with his fellow man. That took too long so the talent was bequeathed to man, by God, thru Jesus.

(Some New Age hippies claim musical Jesus/Genius John Lennon, but that’s another gift imparted by God. Others, like Hassidim endowed with curlicue sidelocks or payot, their birthright to rock the cashbah, proclaim God bestowed the art to Adam, depicted on the ceiling in Michelangelo’s Sistine Chapel but he was Cacáo iPodding) & thusly distracted.

Jesus showed the world the ineffable art of Air Guitar before, during, & after the resurrection... rocking it so hard Christ radiated with bright white lightness (RE: supersonic scientist code for White Chocolate; see Shroud of Turin) upon Ascension.

For instance, Jesus discreetly Air Guitars in the famous painting The Everlasting Supper - history’s most famous dinner party. His solo reaches such a righteously miraculous crescendo, according to Air Guitar fan-boys Brian Wansink (director of the Cornell University Food & Brand Lab) & his brother Craig (biblical scholar at Virginia Wesleyan College) that in a matter of centuries, the meal expanded from a few medieval crumbs to a lavish spread, best seen in Mannerist painter Jacopo Tintoretto who piled the food on the apostles' plates higher still. Portion distortion amounted to nothing new for the man from Galilee. Jesus Christ holds the record for several miracles of "super-sizing" -- a handful of fish & a couple loaves of bread multiplied to feed thousands; or that wedding feast running low on wine suddenly awash in the stuff. 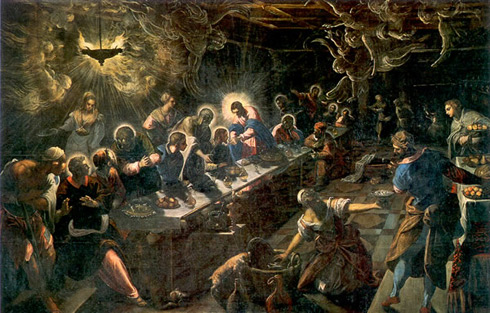 Thusly, the Gospel scribes wrote down the art of the Air Guitar in the Bible & passed it on to man. Since that inception, Air Guitar has shined throughout history like a halo, all across the globe, on & on this holy tradition goes, kept alive by generations of rockers, young & old, up to the present, evidenced by the ultimate Air Guitar guide:
Q: How does one get to Carnegie Hall?
A: Practice; practice; practice... in front of a mirror (better still with your lover – naked naturally; then post vid of said nudity on YouTube).

Air Guitar speaks in relative silent tongues. ‘Globair’, if you will, well before decaffeinated English called ‘Globish’ (thank you Jean Paul Nerriere for that dumb-derriere development) ever hoped to rival it for the lingua franca of the 3rd Millennium.

If listening to a really sweet solo – Skynyrd’s Freebird, Slash on Sweet Child o’ Mine, Stairway to Heaven of course, or anything by guitar demigod Jimi Hendrix... hell, even some classical passages of Scarletti, (sorry hip-pop, sampling don’t cut it, hence the desire to keep real & hire John Mayer) - without a real guitar to emulate the action of rocking, then just pick up the hands, put them in the ‘Our Father who Art in Heaven’ position, & AC/DC “all night long”.

And ‘choc on’... with this Great White... as tall & true as Danta itself – unexcavated as of 2010 beneath overgrowth at the lost Mayan city of El Mirador yet whose mass, when calculating both height (70 meters; 230 feet) from the forest floor & total volume (2.8 million cubic meters) stands among the largest pyramids in the world. Add the man-made platform upon which the temple is built (18,000 sq meters) & it ranks with the most massive structures in the ancient universe. 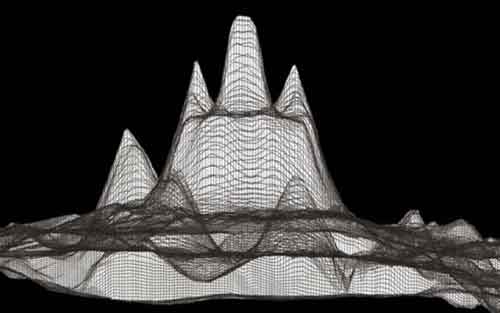 That aside, finely compounded, very soft-spoken, even hushed... even for a White. What some may mistake as meek. Certainly less amplied than that other great goddess of White – Icoa – though no less powerfully serene; the difference between El Rey & Danta residing in the roast: Carlos Eichenberger of Danta preferring a cooler heat.

Neither milk nor sugar ever interfere, both only contribute to highlighting cocoa, further accentuated by precise vanilla placement (RE: perfectly pitched for umami... & probably aided by enriched milk powder containing vitamins, creating tiny bitters). All of it indicating a butter count in the mid 30s percentile.

Soy fractions the only minute drawback – though no small consideration for “Whities” in search of melting glories – detected in the flavor by way of lecithin which readily effects Texture however. Though Danta operates in the cooler highlands of Guatemala City, inside a climate-controlled facility, & professes only a touch of lecithin, its use here seems excessive, in keeping with working in the tropics because White Choc absorbs ambient moisture to a greater degree than its darker siblings, so makers in that kind of environment may compensate with lecithin (which also conveniently extends shelf life). Greater lecithin theoretically lubricates viscosity but being amphiphilic (one hydrophilic end loves water, the other lipophilic fat), it works like a double-edged sword. So while this melt starts out rather stiff, it liquifies fairly quick, suggesting a lot of moisture (at least once upon a time in its processing history) in this bar (more than can bind to even extra lecithin) in defiance of the Snap; the Texture never swelling into those round spherical dimensions that often characterize lecithin... muting the Taste in the process.

Either that, or the butter quality in these beans is on the unforgiving hard side.

In any event, a rare case where a ‘loss’ results in a ‘gain’.