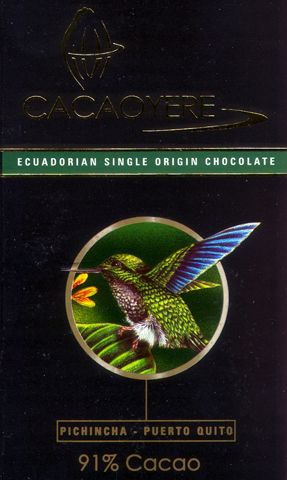 Every bit the equal to the slippery quagmire that was the Battle of Pichincha, May 1822.

Good luck climbing this volcanic mountain rising behind the valley of Quito, Ecuador - steep slopes, deep gullies, dense undergrowth. Bring an oxygen tank to ward off altitude sickness along with, as a safety precaution, some Scottish Albións who saved the day & filled-in back when the 540-man Yaguachi Battalion of local Ecuadorians high-tailed it & retreated.

Ahhh, but with struggle comes vindication... in the after life.
Appearance   4.3 / 5

The spate of these labels, farm cooperatives, & social venture firms supporting them rivals the independent record companies in the music world in their sheer numbers. Anyone who can shake a cacáo tree seemingly gets a deal as fast as any rapper shopping a mix-tape. Goods pulled from various crops are gathered into a ferment pile, then trucked off to a central processor in Quito where 2 or 3 major players take it from there to manufacture bars for export. Prepare for more onslaught... Ecuador is just getting busy & it promises to be dizzy. (For an in-depth view of Reality Chocolate check out Cristian Melo's Left Behind: A Farmer's Fate in the Age of Sustainable Development.)

The parent company of this label is Ecuatoriana - a chicken & sausage producer backed by German marketing muscle. Earlier iterations of it displayed very little stockyard odors or prairie oysters. Instead their bars expelled a wine ‘n cheese funk.

The cacáo in this particular bar hails from the Puerto Quito region in north central Ecuador, a midway point of sorts between other cacáo types seen out of this country – several Esmeraldas farther north & Quevedo to the south (the latter perhaps best exhibited by Guittard). The closest chocolate to this in proximity that has been introduced to the int’l market may be Coppeneur’s Tscahili. Both share a bog-infested character.

This one nearly unmediated save for about 8% sugar & ham-handed soy lecithin (evidenced in Taste as much as the expected Texture), despite which this bar might as well be Nibs – that’s how forward & raw it feels. None of the dazzle of the gold standard at this percentage from this general origin – the stellar Domori / DeBondt 90 classic.

A work in progress - with more of the former than the latter... from the eagle’s perspective or even that of the hummingbird which graces this bar's cover.