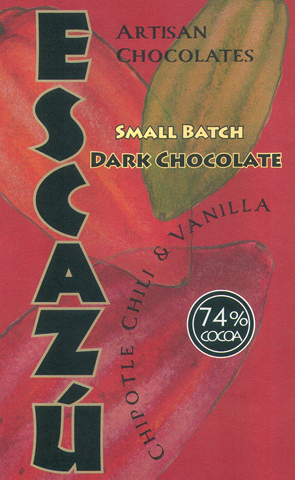 Impact
Mesoamericans took their chocolate mainly as flavored drafts topped with foaming froth. Vanilla & Chili peppers were two of their Big 3 (some scholars report they had a few other favorites as well to round up a ‘Pick 6’ pack).

This bar rips it to nearly blow the head off.
Appearance   3 / 5

Aroma   8.2 / 10
a near copy of its C.O.G. base-blend, only less vanilla driven as chili subsumes some of that orchid’s perfume & pitomba appears in a mite brighter flint (pear or even apple more than apricot) -> wood chips imparted from smoke-dried chipotle which assumes an excited paprika-like countenance; decidedly Earthen, smooth, & mild to conjure a black truffle
Mouthfeel   11.6 / 15
Flavor   45 / 50
streaming vanilla -> pitomba -> chocolate-dipped pear aspect -> heat creeping from rear recesses... really comes on like the back pepper bite of a Tuscan olive oil... a little choking, less all-out conflagration as much as pure capsaicin acid -> paprika qualities in the Aroma breathe thru too... searing the cocoa tannins -> clears sweet-heat on bubbling sugar-chicle to numb the mouth out
Quality   18.1 / 20
Bit rough around the edges – owed considerably to Texture – but ultimately a controlled warmth accentuates cacáo’s compounds, simulating a ‘hot cocoa’ mix.

Jalapeños, from which chipotles are derived by smoking-drying, vary wildly on the Scoville Index. The variety employed here seems of medium heat; then Escazu’s configuration modulates from there via a 74% cacáo-count, the most improtant component being rich butter content since fat alone cools pepper’s fire while still allowing flavor to come thru the smoke-screen.

Well-done & a strong recovery from the label’s heavy-handed Beaufort.