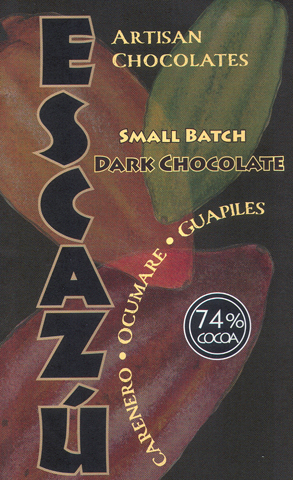 Impact
Ecdysiast is a prim synonym for ‘stripper’. This bar throws down a whore (hey, ya gotta pay, or what neo-fems might call a “sex professional” / very private entrepreneur): lustful & insatiable with some sass for a thanks a choca-fuckin'-lot.
Appearance   3.6 / 5

Plays much sweeter than 74%; those alchemized spice notes bring a gestalt of Grenada rather than Central & South America; add in that wild texture (leaves the taste-chamber strangely numb; not so much astringent, more akin to anesthetized / narcotized) & this easily subsumes its components (Escazú’s 3 amigos: the cacáo types called Carenero, Ocumare, and Matina from Guapiles).