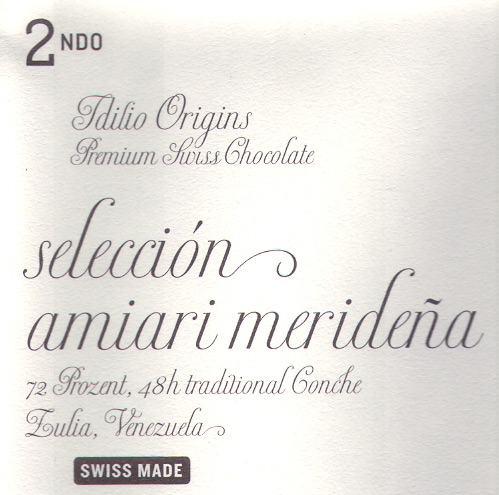 Impact
A chocolate cakewalk... humbug as a fashion show now that Lee McQueen has departed (R.I.P.) until realizing the runway has... well, run out, &, hung up over a precipice, the airpocket drops thru the various sedimentary layers in a chocolate free-fall.

Density in the Aromatics comes true in the Taste. Really on-point for the SdL type. A Siamese twin seen before in Felchlin’s Clasificado, the actual maker of this bar that even banks off that one’s tasting notes - verbatim. Much better manicured here, though, again, the thrill goes missing some... Felchlin’s antique longitudinal conche lapping into a near-stasis point, an excellent equilibrium of flavor drifting toward... boredom, stealing charisma by boiling a little of the soul out. Otherwise, Felchlin gets everything just about right.

Very spare formulation contributes to rather austere character. Authentic... nothing but cocoa ‘n sugar. Devoid of added vanilla hardly matters for a bean endowed with plenty of onboard spice-like compounds in its DNA that requires no backing.

While in sync with the laid back rhythms of its namesake – the college town of Merida, Venezuela which fronts the Sur del Lago region situated in the middle of the Venezuelan Andes - make no mistake: a power bar of tremendous chocolate proportions, a chocolate gorilla really, to ultimately wake taste buds from their slumber & bodyslam them home, restoring this cultivar’s rep which suffered recently at the hands of Felchlin.

Overall, good make that ends up earning respect in a return to form for SdL & Felchlin... thanks to Idilio.