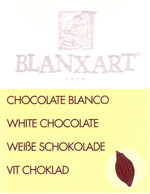 Impact
Sheds light in dark corners even as Blanxart fatally compromises this White Chocolate -- a category whose perennial position as the leading romantic comedy diva of cacáo makes many snigger instead of laugh, turning a potential Oscar into a Gold's Gym™ dumbbell available at all Walmarts™ for the price of a Kmart™ Blue Light Special. For some sad lonely actresses driving on the freeway while sexting, tweeting, facebragging, ego-surfing the iPad (& eating sushi of course), plotting how to save the planet from eco-Armageddon by landing that role in the next major blockbuster, this bar called 'happyness' will still be a warm not-so-metaphorical gun, preferably with convulsions induced as soon as it gets jabbed in lengthwise between tattoos on the neck & nipples, & along with the studs on the tongue... as dessert after the crash.

Good start, well-roasted butter, though it all wears away in the melt (naturally as it would anyways, of course, except earlier in this case). The milk (probably spray-dried though Aroma almost suggests roller-dried) causing some cohesion issues that resolve well enough however.

Could stand more time in the refiner stage + an increase in cacáo butter content to improve both flavor stamina & textural support.