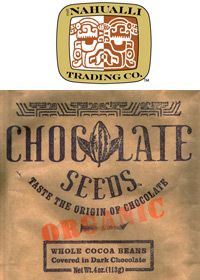 Impact
Eastern Ecuador... in wildly remote stretches of the Amazon jungle along the Peruvian border, far away from the daily mayhem of Homo economicus, live the Achuar. A ‘dream community’ who adhere to traditional ways such as black magic, or drinking Wayusa tea (Ayhuasca vine too) to purge the body chambers, cleansing them as their guiding light to help interpret their inner visions. Tea time is pre-dawn, 3 AM, because the Achuar intuitively understand that most of us may dream every 90 minutes but the longest ones (30 minutes +) occur in the morning. For them, dreams recount the past & foretell the future... like omens. Apt in this age when Big Oil wants to remove them from their ancestral lands. Naturally they’re weary of outsiders.

Back to the vision quest... pretty eurythmical... sweet dreams are made of these beans.
Appearance   4.6 / 5

Also, fractionally less sugar helps tremendously to increase this Flavor’s sustain & stamina (to be expected) without diminishing any of its high notes (somewhat unexpected). In fact, just the opposite, it extends rather than overwhelms them into a cloying mass.

Both formulas contain little bean essence. Each balances primarily on the chocolate coating that filters the beans which crunch down into Nibs once inside the mouth, then onto bits of grit washed ‘n scrubbed by couverture. What limited bean fragments come thru unfiltered show some slight bitter torrefaction at the very finish.

All in all understandable, providing some cover for a start-up chocolate maker developing skills (like Linus his security blanket) while trying to find that precarious balance between awful & awesome.