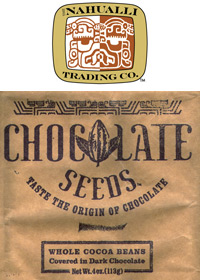 Impact
Little modified IEDs – those Improvised Explosive Devices that in actuality pre-date the Iraq War. WWII on the Eastern Front, the IRA in Ireland, & the VC in Vietnam all had their versions of them. Hell, any time a combat engineer blew up railroad tracks.

These go off then fail to bring the house down in the style of, with all due respect to those onboard the aircraft, the Detroit Diaper Bomber.

From wherever it may be, these are well-shelled (i.e., husks removed... yet a shell-shock opening – albeit unsustained - both in Taste & Texture nonetheless) by an innovative proprietary technique rather than the more time-honored but time-consuming task: manually. It marks a significant processing choice, quite bold next to the easier method of simply roasting, winnowing, & then cracking the bean into Nibs. Results in an aesthetically dazzling optic – a whole bean, glazed in this case - & clean fragrance that’d get taste-buds nearer to the source except for the coating whose sugar-content measures out to roughly a 70%-72% cacáo count in total but feels closer to two-thirds or even 50%.

These can therefore stand-in for the 3rd leg in a tripod with Corallo’s unsweetened Beans and Coppeneur’s Caramelized Beans. They also share kinship with Cocoa Puro’s Kakawa, those being the most elaborately formatted in the category. Both these & Puro's Kakawa have thick enrobing around the bean. Similarities stop there.

This hardly seems a bean really; more of just a gruff old-school bar, almost Modican with the gnashing of the bean replacing the sugar crystals. Sugar though a major player... oh, so-too-sweet.... creating those candied F/Xs to tilt in the direction of confection but sputters & cuts short the full course, never allowing a clear window onto the bean itself (what can be gleaned shows a bit charred at the burnt back). Instead, it ends up drawing blood & taking the zap out these beans.