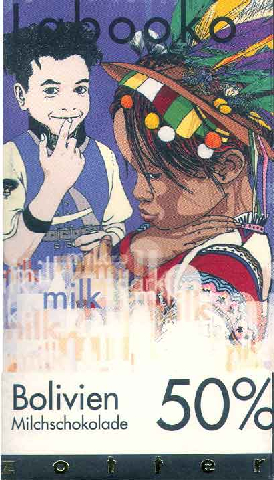 Impact
By 1906 Butch & Sundance decided they’d had enough of life on the run. So first they secured employment at the Concordia Tin Mine in the Bolivian Andes. Among their main duties... guarding the company payroll!

Then they settled down (mas o menos) as ranchers around Santa Cruz, a frontier town in Bolivia’s eastern savannah. Along the trail they possibly crossed paths with CNB (Cacao Nacional Boliviano) & added a little milk powder to it - shades of some Guittard from the States which started in the American West back in 1868 - to help cure any homesick blues.

The kind of bar that would have Butch punching the air with his fists while his tongue hi-5s the roof of his mouth. Perhaps even the inspiration for writing that he found “just the place I’ve been looking for 20 years”.
Appearance   4.1 / 5

Outstanding scale, weight & harmonization whose flavor would be hard pressed to match by any confectioner with twice as many ingredients. The components perfectly & precisely aligned - none getting too far out in front or behind the others – the cohesion unreal. Zotter operating in territory beyond technique, in the realm of alchemy, to easily transmute his prone Bolivia 90 – this sib’s big brother, whose tannic dimension brings a harsh edge to the mellow in milk for a driving slipstream.

All adds up to power... all-action, all the time.