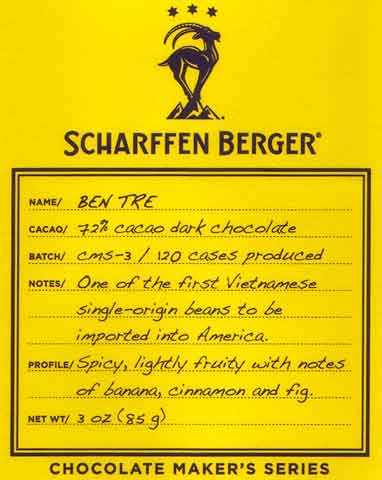 Impact
The first single-origin of any consequence harvested in Viêt Nam.

Hippies can play like it’s the ‘60s déjà vu all over again now that they’re in their 60s. Another sign, John & Yoko, that war is over. The USA never lost a battle while the Vietnamese won.

VC PR fool-tool, Hanoi Jane (with apologies), you were dead right... in the absolute wrong way.

Ho, exemplar of a book titled Bare Feet, Iron Will as well as the namesake for the Ho Chí Minh Trail, once lived in Paris among other places to know good chocolate, maybe even incorporated it into the simple-life at his house-on-stilts Nha Bac Ho, must literally DIG-IT-LOL (Dancing In Grave, In Tears...)

Cacáo has come to / from Viêt Nam... to help refoliate the ground.

Ben Tre Province sits deep in the south of the country, along part of that 9-headed river dragon called the Mekong Delta. The 1st area in Viêt Nam to be cultivated for cacáo, it reportedly practices higher quality control.

This seems to exceed the apparent clonal series planted there (nothing to-date from the parent Malaysia &/or Costa Rica seedlings would suggest it). Perhaps accountable to the rumors of an improbable 9-day curing cycle, likely by fermentary warlord Nam Suong of the Chau Thanh District, in a pulp characterized as a ‘sweet ‘n sour’ combo.

A bar that rather gently spans out in an almost equal number of ways. Overall slender profile; lacks mass & amplitude but nice fruited undertow which flows in & out of a randomized cocoa (again, some Textural blame & maybe added powder??) thru an otherwise well-formulated CBS (Cocoa Mass/Butter/Sugar ratio) of ~ 2:3:2.

Still makes for a kind chocolate.