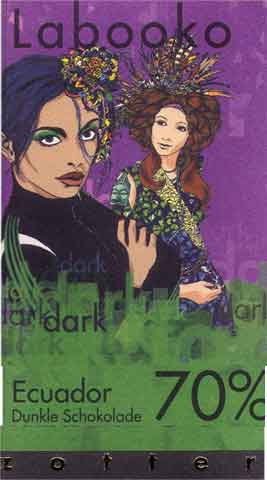 Impact
Solid as a chocolate-dipped banana & worth diverting some dildough on (money spent for sex toys). And Zotter, cunning as a fox, deploys all his guile & rapier sharpness to cut a swerving swath thru Ecuador’s toronado (tempest).

Aroma   8.2 / 10
malted schokoladenduftwolke (German for ‘puffs of chocolate clouds’) drifting right up the nostrils after having fallen out of a palm tree with the thud of a coconut shell that then tumbles down some coastal cliffs formed by scoria / ejecta (thin / porous volcanic rock to go with the Snap) -> lands next to plantain & potatoes of the same fate
Mouthfeel   12.6 / 15
Flavor   44.8 / 50
chocolate banana -> slips on its own green peel & loses some of its load -> skids into palm fronds -> salt plunges the dark depths of pyroclastic wafers -> lightly charred brownie for El Or(e)o FXs that shuts up & keeps on talking... thru some eucalyptus bark
Quality   17.6 / 20
Among the top El Oros to drop on the market. Sourced from the Urocal co-op in El Oro, Ecuador where a 4-day ferment indicates a) hybrid cacáo of maybe modest Nacional germplasm; & b) growers who want to get their beans into the hands of brokers -- & fast -- lest bandits steal away the proceeds.

As a result, this sputters at the midpoint & veers dangerously close to collapse but stays on it to hold its nerve & scaffolding (unlike Bessone and RdC) via Zotter’s wily roast at continuously varying temps (electronic/digital control maintains some volatiles while galvanizing charred aspects) coupled with a heretically short-conche. It produces both that fruit-front at the start plus a ‘soft bitter’ throughout the second half of the progression.

Shy of a great bar, but considering what Ecuador has been delivering lately, a reprieve.