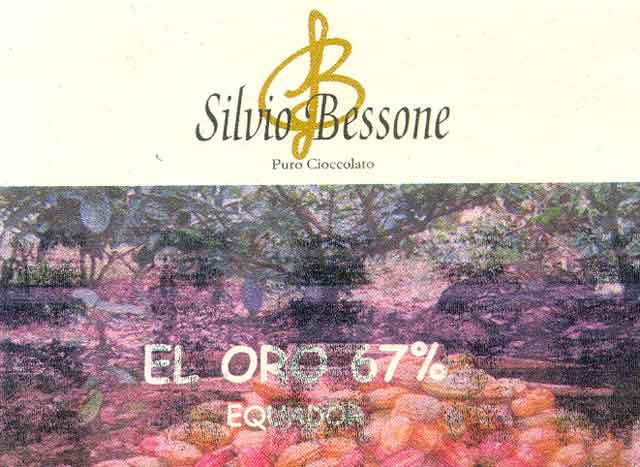 Impact
Ecuaboring... an environmental catastrophe coming from a country's whose chocolate fortunes are now ever bleary & tongue-tied.

When Texaco/Chevron despoiled the pristine Amazon Rainforest in the NE section of Ecuador throughout the 1970s while drilling for oil, it left behind an ecological disaster zone: toxic cesspools contaminated the water table & ooze seeped over the landscape. Nothing illegal – back then regulations were minimal – just rapacious & short-sighted. The company paid off the central gov’t in the capital at Quito for the clean-up costs & some punitive damages, & was handed a waiver protecting it against any future claims.

30 years on, locals realized they’d been had & demanded more in a class-action lawsuit. Good luck.

El Oro (meaning ‘gold’), the district from which the beans in this bar are pulled, lies in the country’s SW, but same difference. Clones have moved in to squat on land once standing tall with grand Nacional cacáo trees (which should be uplisted to an endangered species), no doubt with promises from cocoacrats of better yield, greater disease-resistance, & probably hoodwinked with claims of superior flavor. (A common tale re-told time & time again to growers around the cacáo belt.)

Let’s hope they catch on before it’s too late & gone for good. By talking to geneticists in the field, they’re getting wind of it, hungry to learn about the ancient varietials that put Ecuadorian cacáo on the map & originally made fame & fortune for it.

This El Oro has all the hallmarks of CCN-51. In other words, flat & dumb as trying to transmute the nitrate-rich guano piling up on the Chincha islands off the Pacific coast into gold now that synthetic fertilizers have been invented.

Time to call Al Gore to get working on cacáo in Ecuador.
Appearance   4.4 / 5

Aroma   5.2 / 10
a gristmill: fudge, grains, & wood... low-lying & self-contained; rubs down to raw cocoa butter + gentian root... the fingerprints of CCN-51 all over it
Mouthfeel   13 / 15
Flavor   30.3 / 50
cocoa backed in very dilute coffee -> soft licorice twist dims as coffee comes on more pronounced, rendering carob -> classic ishpingo conjures fake-fig -> the granary from the gristmill in the Aroma whirs & chaffs away rice, corn, & cassava -> luffa cylindrica flattens this to an end-stage aguardiente (i.e., everclear alcohol... a steely substitute for the promised pineapples on the label) -> guano-faced rock -> burnt forest branches -> dive-bombs on melted butter-rubber / latex
Quality   12.7 / 20
Tries valiantly like King Arthur to pull the blade out of the stone & salvage a desperate situation by a) torching a bean already DOA (almost zero flavor flags; was there any ferment at all?; on the upside, very low bitterness); b) increase sugar load to 1/3 (most Ecuadors come in less than that); c) max the butter count to cover it all up. It almost worked.

Only problem: the gene pool has been tinkered with too much to pull this off (maybe IMC 67 overly dominates the CCN-51 blueprint).

A chocolate that just gets ground down & could’ve used some vanilla.