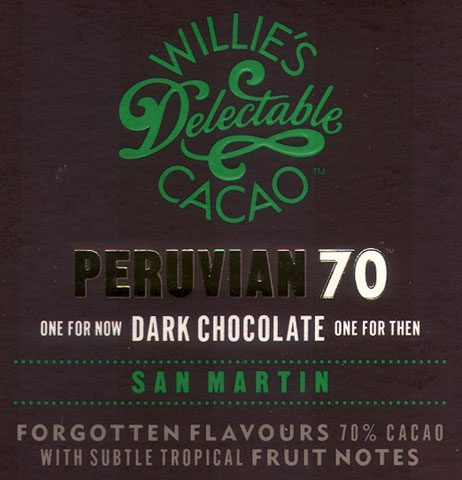 Impact
'Peruvian 70' ain’t quite got the ring of Apotequil Peru 72, just the sound of that wants to party like it’s right before, well, 1970... when the Ancash Earthquake -- epicenter just southwest of San Martin where the cacáo in this bar grows -- rocked the whole place, tearing buildings down & sending houses tumbling like so much cheap jewelry in the ensuing mudslides. 45 nerve-rattling seconds later, tens of thousands lay dead in its tracks. So many that the Peruvian government forbids excavation of the damaged areas where victims perished & remain haphazardly buried, declaring it a national cemetery.

The catastrophe coincided with another earth-shattering development to roil the Peru countryside: the rise of Sendero Luminoso (The Shining Path aka PCP for Partido Comunista del Perú), a band of Maoist guerrillas. They imprisoned captives to work the coca fields, financed a nationwide insurgency thru the fruits of that labor, & marauded across the land under their motto ‘We’ve a Right to Rebel’ in a deadly variant of the Beastie Boys’ You’ve Got to Fight for Your Right to Party... without music & alcohol naturally, or any celebrations whatsoever... all of which were severely restricted by this Mohammad-free Taliban.

Meanwhile, indigenous cacáo groves around San Martin experienced their own kind of assault. The agricultural ministry with backing from int’l aid agencies, NGOs, & U.S. DEA officers conducted both eradication campaigns against narcotic plants & propagation programs of trade commodities (such as cocoa) to convert campesinos from growing one for the other. This counter-insurgent strategy called for sending in the clones – specifically a battalion of CCN-51 from, strangely, neighboring archrival Ecuador.

The ploy worked, up to a point. Drug trafficking still proves more lucrative than candy manufacturing but the clones have come to dominate the landscape. Estimates runs as high as 80%. Just as the Sendero have been largely suppressed, so too the original cacáo stands, replaced by CCN-51 – the reactionary force of the entire species.

Perhaps fitting & in keeping with San Martin... named after the Peruvian saint from Porres who cared for the sick, the poor, & the enslaved. Seeing how he himself was of mixed blood, St. Martin de Porres stood for interracial justice.

So have a heart for those in need, especially a misguided clone.
Appearance   4.1 / 5

Talk of every which processing method (convection oven or drum roaster, ball vs. roller mill, dry or wet conche, etc.) becomes meaningless unless the bean itself measures up.

The wrapper waxes on in ironic English about “forgotten flavours”. Truly the land around San Martin suffers from amnesia. Following the river north to Marañón Canyon will help it to rediscover the memory of the chocolate gods where origin cacáo still resides.

The good Bromans (growers) in San Martin did their best. Ditto Willie. Chalk ‘em up as more CCN-51 victims.

Long standing reports continue to circulate – issued mainly from the mouths of the very geneticists in on the engineering -- of a “new & improved CCN”.

How long can one hold their breath before asphyxiation sets in?