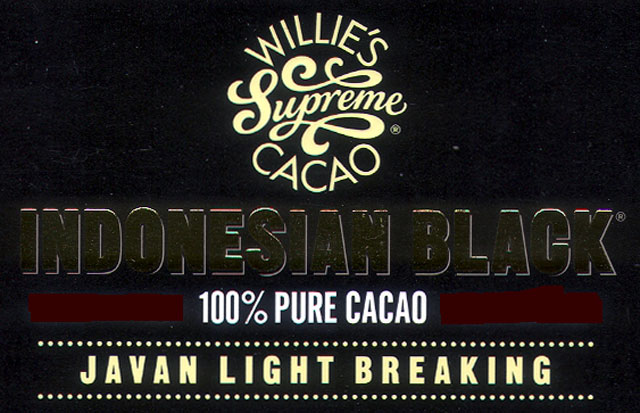 Together they bring the thunder 'n lightening for some major break 'n bite.
Appearance   4.7 / 5

Aroma   9 / 10
sweetly fermented tang "en baba" even for a Java: lemon & starfruit over mildly spiced cocoa (including the peppery betel leaf) -> once broken / Snapped finds some tree sap sweeteners (maple / dammar gum resin)
Mouthfeel   12.9 / 15
Flavor   41 / 50
dry cubeb wood -> vinegar the light break to correlate with all the citrus in the Aroma + ever brighter on maprang & bilimbi, under-girded in bitter bark -> bitter orange marmalade with coffee back -> the much promised caramel tones only at the fringed edges, & then only attended by a wicker-aged pecorino oro antico cheese -> juniper lingers in the down shaft
Quality   16.1 / 20
The first unsweetened 100 to emanate from Java on the premium choc market. Willie furnishes the unadulterated reason why Java teams so well with Milk Choc: a cacáo of some bristling citrus & tannic bitters that shout out for dairy fats & solids.

As is, a compound both austere & bracing. Bright acids but the polyphenols can contain them (& vice versa) so all resolve symmetrically in balance. Nonetheless, the flavors arrive ahead of one another -- a bit unwelcome -- & refuse to sit well with each other to rekindle Marcolini's fire-retardant on the origin from vintages past.

On the upside, so much acetic acid to work with allows a barsmith some latitude, especially in the conching process.

Indeed, the resolution in the after-math here holds out that latent grace note for greater possibilities to be realized in more elaborated formats – be it Milk Choc or Semi-Dark.