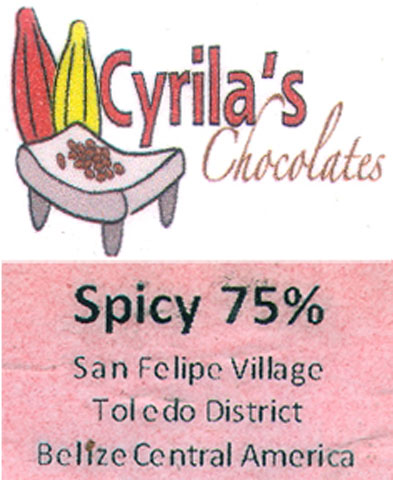 Impact
Vanilla, Chili 'n Cacáo: 3 specialties from the New World introduced to the rest of the globe & reunited here by the very people who were likely responsible for putting them together in the first place: the Maya of Mesoamerica.

Though a little hotter than 'gringo-safe' fare at tourist resorts (this would make them tear up a bit) as well as products for export (which FairTrade minders mandate to "tone it down"). Yet another demo that Cyrila's can do no wrong... even as it acts in doing a little harm.

For heat-seekers crying out for the real deal on, this, the autumnal equinox who, along with fellow sky-watchers on the serpent steps of those Mayan alarm-clock pyramids, look to extend summer by just a few more degrees before the rift between light & shadow / fire & ice tilts in favor of wintery darkness.
Appearance   2.4 / 5

A fiery chocolate nonetheless, yet one that resists the urge to swallow for fear that the experience will end. No worries, the thermo-taste lasts well beyond its ingestion.

In the main, however, pepper forms a blister above the fruits, the twain hardly mixing except in that flambé after-glow. A setting sun, so to speak, to this Fall classic.