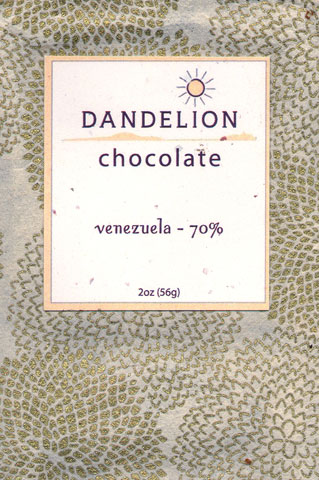 Skip the recipes, the boxed mixes & pre-heating the oven, just sell this instead at the next bake sale to raise some quick cash for Ransom Express notes posted online by cacaoteros (cocoa farmers) irritated with fluctuating prices & commodity speculators in NY; the NAFTA free trade gimmicks; the Fair-Trade schemes & certification regimes.

Taking matters into their own hands, they abduct American school children on field trips to Venezuela. Hey, it's only a 24 to 36 hour ordeal -- nobody gets hurt -- after which everyone feels safe & sound again, & between Hugo & Barack the wealth has been spread around a bit. Redistribution of income, the chocolate way.

Of course the danger always lurks that after one bite parents might just shrug & figure that trading America's obese youth fattened on burgers, fries & milkshakes for this butter-soft bar amounts to a good deal.

In which case, once again, the cacáoteros are on the short end.
Appearance   4.4 / 5

Dandelion's cool roast aligns well with the bean. In fact, it roasts up slightly on their high side (still low compared to most of the rest of the pack) to generate the brownie affect, though without any char whatsoever (zilch in the way of bitterness or astringency) to re-iterate a) that generally light roast, b) precision craft & c) good genes.

In all their bars to date Dandelion's technique accentuates a particular tone in cocoa types that are inhered with it & draws it out in those that aren't. Namely, flavors trend to run down into caramel, perhaps boiled in the conche vat, which becomes a kind of house signature inked naturally in chocolate brown.

This Venezuela 70% is no different except the caramel is more subtle in a nod that leans in the direction of the cultivar's Criollo lineage & lactic acid formation in the fermentation cycle.

All in all, a quality seed selection well-handled in the processing from Dandelion.