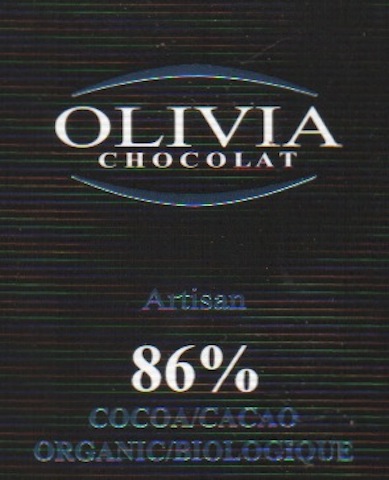 Impact
Some like their coffee black & their chocolate very brown. This accomplishes that with a soupçon, as French Canadians say, of sugar (just 14% here).

Chocolate, which only in the modern era became associated with domesticity, sweetness & children, once was the libation to steel warriors girding for battle & human sacrifice for religious offerings, plus an XTC enhancement prior to entering the harem.

86% cacáo-content harbors, on the face of it, a return to chocolate's fierce glories of the past but, alas, in numbers only.

At the heart of it, Olivia guts this bar... sort of 'de-bromized' in the process (the choc equivalent of decaf). De-masculated & de-souled too. The adrenaline removed along with the blood & the organs.

There's a Spanish saying, the adopted language of most Bromans / growers in the cacáo groves on the island of The Dominican Republic set amidst the Caribbean Sea from where this bar sources its seeds, that translates ‘it’s like swimming & keeping your clothes dry’.

Olivia boasts some proprietary method for the elimination or at least reduction of bitterness & astringency. When asked what that might be, the answer comes back "that's the proprietary part". Fair enough. All part & parcel of the smoke & mirrors campaign that is chocolate now & forever to gain a competitive advantage.

In any case, probably nothing patentable.

Several steps along the processing continuum can control these factors. From seed selection to fermentation / drying & manufacturing techniques (cleaning / steaming as well as the more obvious roast & conch).

The proprietary nature of Olivia's claim bears added scrutiny seeing how the CBS (Cocoa mass / Butter / Sugar ratio) of 15:12:5 reads out-of-line. Cocoa butter supposedly has been added to the formulation & yet seeds on their own intrinsically contain 50% fat on average. Do the math.

However unlikely, if actually true, perhaps therein lies the secret? Playing around with cocoa powder anyone? Partial Dutching / alkalization (although the Color of this bar offers no such clues)?

Alternatively, given the denuded nature of the flavor, the responsible unit would most likely be the conch (in tandem or on its own) that strips the profile bare. About the most Naked & leveled D.R. to appear on the scene in years, an origin known for its dynamism. An eviscerated ghost really.

Nothing wrong per se; just nothing winsome either.

And that is its selling point: a tolerant high percentage cacáo-content to get your antioxidants on in the image of another meek bar in the 80%+ class -- Marcolini's Fleur de Cacao.