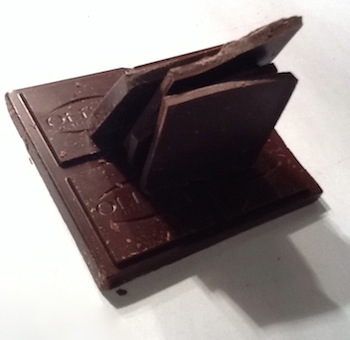 A Bar that Defies Gravity & Taste

The green / vegetative attributes are compliments of no roast, while hammy aroma & wooden tongue speak to some fermentation/drying issues. Olivia then strips it down as much as possible in the conching so that scant bitterness & astringency remain (ditto, alas, flavor too). So much so that precious little difference exists between this & the label's roasted version.

Why bother then to abolish the island's hard-won reputation for Big Taste? That same rep, mind you, rooted in a strong tree stock & post-harvest methods, mollifies what should be a brutal percentage aggravated by low-impact processing.

In this bar's case, all for the sake of preserving "raw" cacao's ostensible health benefits &, naturally, marketing dollars.