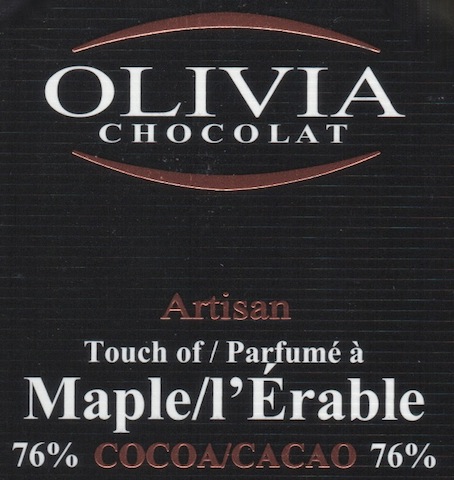 Impact
An altogether new sensation in a flavorsome world: acrid-sugar (chemically well beyond any figurative speech of 'bittersweet').

Yes, maple may be so deeply planted in the soul & psyche of Canada from where this bar hails to make the following sound xenophobic to anyone living outside of that country, but there’s grass roots & then there’s trash roots.

This toxic rhizome wraps around the head, invading every orifice with poison.

Aroma   7.9 / 10
strong, perhaps just overly so... of hardened maple syrup scraped off the musty cupboard shelves... though nothing too alarming
Mouthfeel   11.9 / 15
Flavor   21.7 / 50
one long bitter stream from the get-go
Quality   4.3 / 20
Inexplicably bears no resemblance other than physical shape & size to its constituents (Olivia's stellar 76% & its flavorful Maple Flakes). Marries the unripened pods of the former to the boiled bark rather than the sap of the latter.

On the surface the only difference between this & the Maple Flakes is that the flakes are finely-ground & fully integrated here into this bar's compound. Clearly something more awry has gone wrong than just that. Someone fell asleep at the switch &/or a caustic element crept into the mix.

Either way, a bad off-batch. Horrid.

Everything one can hate about chocolate in a single bar. A poop chute.