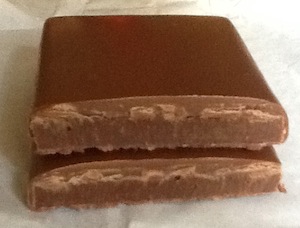 Altered from Coppeneur's other filled-chocolate / praliné-bars in that the company builds it more along the lines of a duplex rather than their more common tri-level construction. A Semi-Dark ganache enrobed in Milk Chocolate (& mottled where the twain meet). The downsizing ends there though. This just scales huge & elaborate scaffolds of flavoring.

Sure, Coppeneur probably pours a younger VS blend of brandy, less demonstrative & shorter in the mouth than the reserve quality. And the cocoa presumably hails from some mass-production manufacturer (Callebaut? Coppenuer rarely employs its own couverture for their confectionary side) of a bulk-grade origin (West Africa?).

A great marriage because at the heart of it both a cacáo seed & a cognac-brandy grape (typically the nasty white Ugni Blanc) are unpalatable in their native states & would never become specialties save for the transformation each undergoes at the hands of human ingenuity. Both heavily fermented goods: cacáo has its wooden boxes & cognac the copper stills. The drying process in cacáo somewhat mimics the aging in the cognac in that it likewise reduces water content.

But their symbiosis tastes, literally, unreal... as in unfounded in nature.

Despite this bar's name, walnuts hunker down, running underfoot, never too obvious or even ostensible but cross-girding the cognac to the chocolate in that all of them share nut traits (analogues in the case of cognac & cocoa). Walnuts furnish a necessary reminder of that because, in the case of the chocolate at least, the sugars overtake it & prevent much of any base cocoa flavor from emerging -- one of the few drawbacks to an otherwise stellar contraption of flavor.

Coppeneur then leaves it to an X-factor -- coriander -- to rise up instead & make its stealth move toward the latter part of the progression, a key element in galvanizing the components (particularly cognac which it seemingly suffuses) & extends the length which reverberates for ages... offering more proof why the good distillers in Cognac disparage wine as "grape juice".