Impact
The María Capovilla of Chocolate.

She the Ecuadorian supercentenarian; the last remaining documented person born in the 1880s (wonder if Sting, the writer of Born in the 50s, can sing that?); the oldest human ever of the southern hemisphere; & the oldest person whose life spanned 3 centuries. 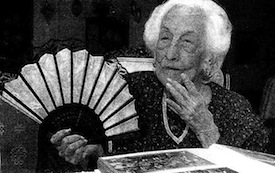 Capovilla holds more records than Lance Armstrong or Barry Bonds except for maybe lying about doping. Given her age & in keeping with respecting our elders, the lady at least deserves a pass for claiming she never smoked, drank or injected.

In this age when any cracker will lie to get on TV -- like holding the winning numbers of a half-billion dollar lottery but somehow losing the ticket in the toilet -- Capovilla had the documents to prove it. (Yes, Mr. President, you're far from alone in having to produce a birth certificate.)

At the time of her death shortly before her 117th birthday in 2006, she became the sixth-oldest fully documented & officially validated human to have ever lived (7th if including Methuselah; 8th when counting Christ's eternity).

The daughter of a colonel, Maria lived a life among the upper-class elite, just as Ecuador's fabled Nacional cacáo once did before falling into ruins.

Sure she had her health scares. At age 100, Capovilla nearly died & was given last rites by a priest. But this woman, tough as the Texture in this bar, recovered & lived in good health for another 16 years (Ditto the Flavor here). In her late years she needed the assistance of an aide if not a walking stick to get around. Same too with Nacional, whose woody taste survives with lots of help from geneticists & breeders.

Like any centenarian, this bar is a little old, decrepit, musty, cantankerous, & of a clouded memory. And yet a living relic enshrouded with what once was &, who knows, given advances in bio-engineering, might become again.
Appearance   2.5 / 5

Rather non-linear; a vertical stack instead that recalls pre-21st century chocolate. No compounds left behind but together carry forward in succession & accretion. A testament perhaps to rather uniform genotype, as opposed to the multifarious cross-hybrids that rule the chocolate roost nowadays.

Though occluded somewhat by the butter, then further obscured by poor storage & handling issues that beset the Texture to miserable depths, some pedigree still manages to peek thru, whether higher germplasm Nacional or one of its many EET offspring.