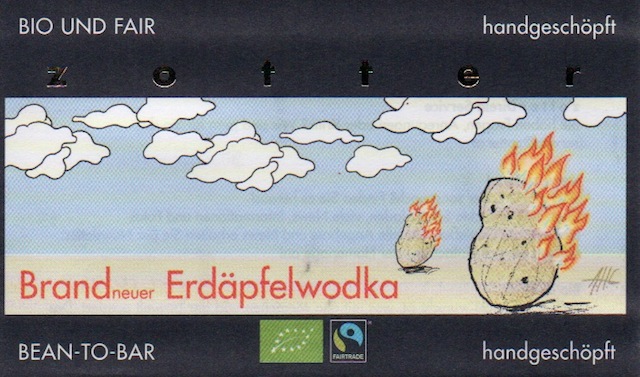 Brits have their fish 'n chips; Italians their pasta, & the Japanese sushi.

Take the Americans: their heft can be attributed in part to greasy fries made from Idaho potatoes.

Leave it to Eastern Europeans then, particularly Poles & Russians, to drink their potatoes rather than eat them. Very resourceful.

Aroma   9.1 / 10
not a scent of any tuber like potato but the jasmine-like tuberose + Fruits 'n Flowers galore centered around fresh pears & apricots of gummy-bear proportions & a rare peach blossom, pink peony & sweet acacia -> subsides & eventually reclines into a Milk Chocolate posture
Mouthfeel   12.3 / 15
Flavor   45.2 / 50
sweet bite, nothing but cane sugar -> then dried apricot with mounting if mild alcohol infusion (attributable to 'cane sugar brandy'; see list of ingredients below) -> tart cringe at the side palate -> 1at clear sign of potato... but as a sweet-potato backed in chocolate (sensational) -> enveloping vodka, though mainly as an afterglow / halo
Quality   17 / 20
Vodka very recessed in opposition to the dried fruit & sugar which all together rise to the level of apricot brandy.

The fruit so dominant that the other battery of ingredients seem inconsequential (particularly the Chili Bird's Eye which Zotter deploys to similar effect in his Scharfes Schaf).

No doubt they add to the layered complex of flavor; but so manifold & varied as to be evasive.

Unlike Zotter's Marc de Champagne or Scotch Whisky, the pour here feels very relaxed & easy, even shy. At around 5.5% of total composition, the liquor weighs in about half compared to his use of alcohol in those other bars. Vodka's relatively neutral character (compared to the grape & barley) further adds to the subtlety... it hangs around but very much a background actor that even veterans of 12-Step programs might miss it -- spotlit only in glimpses -- such as the fantastic sweet potato bridge between chocolate & vodka toward the finish.

Therefore, no need to card anyone to check the age on their I.D. before selling them this. Tricky & inventive... a well-executed formulation.