He the explorer after whom a bay, a river, & many other landmarks are named. On his last voyage in 1611 around Canada, the crew mutinied & set Hudson adrift in a small shallop, never to be seen again. Where might he have gone...? Into oblivion & history.

Since wintering in the frozen arctic, perhaps he dreamt of sailing toward warm tropical breezes before an iceberg crushed him beneath his tiny capsized vessel.

In any event, this bar suffered an erstwhile mutiny, at the hands of a roaster that torched it hotter than a mid-day sunburn in the tropics. With a change of seasons, cooler heads prevail.

REDUX REVIEW -- below are segments of SOMA's Trinidad 70%, initially released in 2012, followed by a refresher in 2013. The rating reflects the latest upgraded batch -- a chocolate that marks the further evolution of a barsmith.
Appearance   3.9 / 5 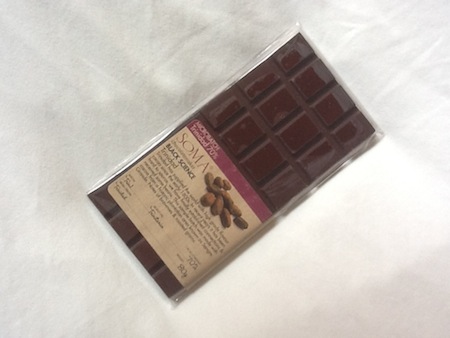 Aroma   8.1 / 10
2012: very vinous... hanging grapes developing noble rot, on their way to black raisins, not so much in a bottle but a cylinder of chocolate with malted grains / breakfast cereals cut by a rather rare appearance of refreshing passion fruit -> palm frond & plantains round it out; incredibly well-proportioned

2013: delicate even for Trinidad -- a dairy case of butters & creams -> candied pinks & purple before settling in more accustomed grass
Mouthfeel   12.3 / 15
Flavor   43.2 / 50
2012: malt & molasses lead the parade -> fudge brownie hard on their heels -> dark toffee / caramel, foreboding the worst to come -> cocoa rice crisps -> back bitter as charred edges to the tannins emerges & envelops into a torrified center faction til a fade out on black, soot, & ash

None of the fruit or grass or delicate chocolate flavor that earns Trinidad cacáo its name in the fame game. The promised raisin in the Aromatics never materializes.

Instead a heavy-handed roast pervades to be a joy killer. Harkens back to the scorched earth policy with which Soma administered its early Ocumare. Yet it provides some dark depths... albeit sinking to the level of sullen depression. Good grief. Only butter spares it from an all-out disintegration.

2013: A different batch & superior outcome. Overturns the earlier mishap in an extreme make-over for a serious upgrade. The re-balancing attributable largely to an improved roasting curve that, on the downside, also shortens the length some which in the overall scheme is secondary if not quite trivial.

Trinidad... the way it's supposed to be.