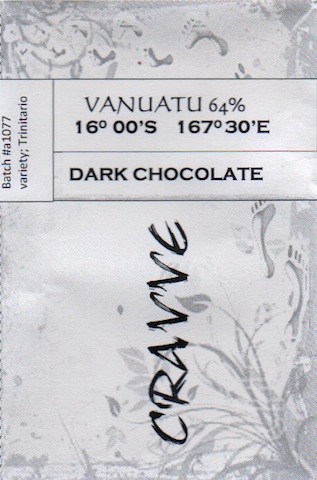 Impact
This bar evokes one of those atomic atolls way out in the Pacific -- i.e., a tropical paradise under the mushroom cloud -- whose mutant foliage bear the fruits of nucleated technology (basically an island in a microwave).

Mechanically kiln-dried so that any subsequent roasting, however light, seems deep-fried, then stuffed into polypropelene sacks to enhance flammability.

Supposedly evokes "herbaceous flavor"; if so, only in the way that uncontrolled burning of the forest replenishes the soil.

64% cacáo-content calculated, according to the wrapper, as 50% cocoa mass + 14% cocoa butter. Barsmiths usually add around 5% extra cocoa butter, or none at all. 14% puts this in league with Choklat's butter-bars from Calgary. Where butter in those serve as a salve, this just just accentuates the scorched Earth policy by letting one feel the grim reapings as well as taste them.

Poor seed selection, abysmal post-harvest, & woeful processing. What more can one ask for? Other than that, it all goes south into an ever downward death spiral.

That wrapper also makes this inexplicable claim: "The lower cocoa content allows the underlying flavors of this bean to be revealed."

Burying it, therefore, should resurrect it.