Impact
There are a couple ways to approach Uluru (aka Ayers Rock), that massive block of sandstone which rises out & up above the flatlands in the heart of the Australian Outback:

1. Take the measure of the monolith… 348 meters (1,142 feet) high x 3.6 kilometers (2.2 miles) long x 9.4 kilometers (5.8 miles) around & exclaim ‘OMG, that’s like, uhh, 'gargantuous’ while pulling on the last Foster’s® oil can of the night & trashing the site to watch the sunrise highlight this the largest single rock in the world before staggering around thinking ‘bout an ascent to the top of it only to land up a face-plant.
2. Revere Uluru for the sacred site it embodies to the local Aṉangu aborigines whose ancestors, they believe, inhabit the rock as spirit dwellers.

The flavor in this bar tastes so focus-group tested by those in the 1st class that it belches “awesome”.

Chocolate for tourons. Will sell well. 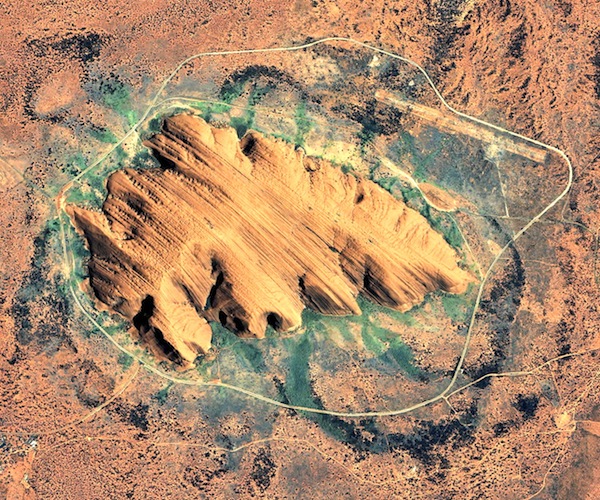 Aroma   7 / 10
thin, even weak, backbone hung with sweet flower petals
galvanizes marshmallow & slippery elm
vanilla ultimately predominates
Mouthfeel   9.3 / 15
Flavor   26.7 / 50
vanilla plumes all over it -> betel leaf struggles to cut thru & fails -> Oreo® (charred yet cloying) -> clouds of slippery elm hungover from the Aroma
Quality   8.2 / 20
Part of Daintree's Oceania line... the label calling attention to one of the 4 major cacáo-growing quadrants in the the world (the other 3: Amazonia; Caribia; & Africa).

So what distinguishes this Australia from its other Australian, re: its own Daintree Estates 70%?

The company goes for an extreme make-over, adding 5% more sugar (the molasses-laden raw variety at that) & then some to this formulation, in a regression of type -- a chocolate-flavored vanilla bean -- that shows ironically Darker (credit higher roasting for a partial explanation).

As such, it downshifts & projects absolutely zero of the high register notes contained in Aussie chocs from Mossman Gorge (Daintree's aforementioned own, or Zokoko's version) to suspect that this hails from farther down south at Mena Creek. But the company vouches for the seed selection as being strictly Mossman origin.

Either way, where Zokoko piles on even more mounds of sugar atop its Mena Creek bar, Daintree achieves similar FXs in smothering this with enough vanilla to rival Askinosie's El Rustico that was commissioned for the salami dept inside a MIchigan deli or, closer to home, the Mast Bros' cover-up of a PNG crime-scene.

This bar's emphasis on Australian-grown vanilla at least provides an exposition of it.