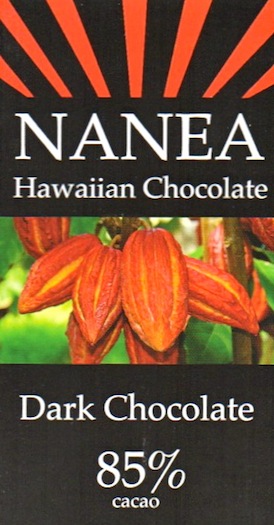 Aroma   6.1 / 10
that monster micro-brew in Nanea's Criollo slides over to the salami section in the back of the deli next to the bins of coffee beans
Mouthfeel   10.6 / 15
Flavor   31.8 / 50
bees wax -> coffee -> bubble yum / cotton candy -> bitter joins the fray & some salami fat too -> banana 'n egg cream (peak of the experience) -> atemoya then back to bitter fat -> coffee grounds with a shock dragon fruit -> spongey jackfruit
Quality   10.1 / 20
A blend of Nanea's Criollo + Tom Menezes' -- the hallmarks for a great blueprint but, as with many such super-pedigreed bars, they total less than the sum of their parts -- although none more spectacularly than this.

Poor technique all the way around & nowhere so acutely felt as in the Texture as the grinding / conching leaves some Nib fractions intact.

Other than some intriguing bitter-fruit coupling, a bar that simply gets only a modicum out of its cacáos.