Impact
Obscured in the crossfire surrounding mass-shootings & assault weapons is that of the 30,000+ violent deaths in the USA annually, two-thirds are suicide -- the overwhelming majority with a handgun. Sixty American citizens vote with their hearts & minds & bullets each & every day of the week during the month, year-round, declaring that the generalized mayhem in the system (both to the body politic & the physical body) makes life unworthy of living.

Chocolate too, like several industries, tends to hide its internal atrocities. (The low-wage seamstress behind the haute couture dress, or blood diamonds, are other examples.) Its end-flavor, however, often belies what’s beneath in taking the hard bite off brutal reality.

This bar serves as a reminder of the bitter truth. 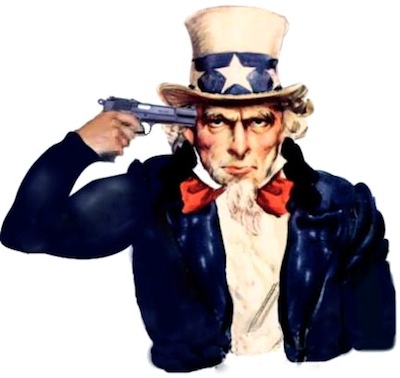 A Salute to Good-Food / Good-Mood: Uncle Sam wants you to eat chocolate, the fruit of the Theobroma cacao tree, which satisfies the RDA of fruits & vegetables, & helps fight depression (economic as well as mental) or he'll shoot himself.
Appearance   4.5 / 5

A punishing percentage that further punishes with its teasing entrance, then buttery blandishments that develop into a static cling of astringency & minor points of interest.

The CBS (Cocoa mass / Butter / Sugar ratio) of ~3:3:1 dramatically underestimates the cocoa butter component.... fat on the edge of stifling. Some latent potential manages to peek thru at the very end... alas, too little / too late.

Pointless really... other than the low-sugar delivery of cacáo's healthful compounds. Good for an antioxidant supplement. A chocolate in need of re-formulation.

República del Cacao maintaining its reliable consistency by once again shooting itself in the foot in trying to raise the barrel & aim high.