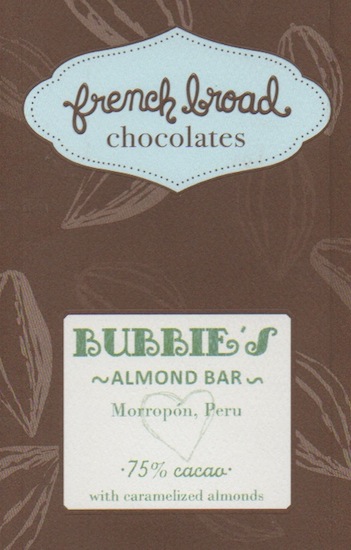 A bar to make any mother proud of her son (women naturally show pride for their own) even as it makes every southern bubba wince some.
Appearance   4.7 / 5

Aroma   8.9 / 10
an Almonds Brothers jam -- nuts (including cocoa) + a thin smear of jelly
Mouthfeel   12.6 / 15
Flavor   25.1 / 50
citrus splashes then clashes into caramelized almond with no shot to withstand the sharp acids -> leaves behind a bitter seed extract
Quality   8.4 / 20
Another Peruvian base scooped up by French Broad on their last trek to the Amazon. Morropón sits right down the road from the label's Chulucanas source, & from where Colin Gasko contracted with broman Juan Tirado for the white-seeded Rogue Piura bar. Similarities stop there.

Accidental; this compound topples over from the bright volatiles that sweep everything up in their path. Just doesn't work.